You are here: Home > NSW Biosecurity Bill falters at the finish line

After five years of effort to improve NSW’s invasive species laws, we came excruciatingly close last week to gaining some landmark changes. In the end the Bill was left to languish until after the election. 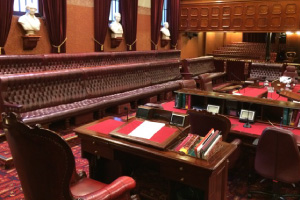 The fate of the NSW Biosecurity Bill will now be in the hands of a new government and minister after the election in 2015.

Our reform efforts began prior to the 2010 state election when we proposed a ten-point plan to deal with the state’s ‘creeping peril’. This raised the profile of the weed issue and resulted in a commitment to $40 million in new funds to national parks over four years.

More recently the NSW government tasked the Natural Resources Commission to review weed management. The Invasive Species Council, along with state conservation bodies, called for changes including a ‘permitted’ or ‘safe’ list approach to regulating weedy plants, a duty of care and oversight by a statewide committee. The final report of the commission strongly supported these changes and many others. Lack of government accountability for outcomes was a big problem identified by the commission. The review process was excellent for building broad support from representative bodies for farmers, local governments, plant nurseries and conservation groups for the recommendations. Our good ideas for reform were being listened to.

Unfortunately, the NSW government had other ideas.

As part of national reforms triggered by the 2008 Beale inquiry, each state has been rolling out generic but powerful framework biosecurity laws. Western Australia and Queensland had passed new laws while NSW and Victoria were pushing their largely similar models through their respective parliaments. At the federal level, the Coalition has just introduced a Biosecurity Bill that Labor failed to get passed in 2013.

One shared characteristic of these various laws has been the way each government has largely ignored stakeholder proposals to improve the legislation. This was certainly the case in NSW.

When the Biosecurity Bill was tabled in the NSW Parliament late in October 2014 without any exposure-draft consultation, missing were the accountability measures and the permitted list approach recommended by the Natural Resources Commission. We were pleased to see that a ‘biosecurity obligation’ was to be legislated, along with measures to improve management of roadside and aquatic weeds.

In an unusual situation that opened up the prospect of major improvements, both Labor (because of the rushed and poorly managed process) and the Shooters and Fishers Party opposed the bill. The government was left to negotiate with the Greens to get the legislation passed before the March 2015 election.

An intense and rapid series of negotiations followed between the Greens and the government, with close involvement by the Invasive Species Council and NSW Farmers, who were both deeply dissatisfied that such broad powerful legislation would rely on undrafted regulations to spell out how the powers would operate. It was refreshing to work closely with NSW Farmers, who were equally keen to see improved accountability measures.

Government came very close to supporting a package of amendments: the precautionary principle and a powerful state biosecurity committee headed by an independent chair with a strong audit function that would advise how the legislation was to be implemented and prepare a four-yearly state of biosecurity report. A last minute threat by the Minister for Primary Industries to use the biosecurity laws to target animal welfare activists entering pig farms and other premises without permission led to the Greens withdrawing support for the bill. We believe that their concerns about the bill are unfounded if animal activists take care with their hygiene procedures and that good biosecurity is fundamental to protecting the welfare of animals.

With just days to go before Parliament shut down before the election, NSW Farmers and Invasive Species Council pushed for the amendments to be passed. Labor came on board but the government refused to bring the bill before the upper house for debate.

In the end, the debate never happened and the amendments were not moved. The fate of the NSW Biosecurity Bill will be in the hands of a new government and minister after the election.

Some good did come out of the negotiations. There is now a broader understanding of the importance of institutional arrangements to guarantee government accountability and lower biosecurity risk, our relationship with NSW Farmers has strengthened and we realise that more work is needed to explain how good biosecurity laws benefit animal welfare.

One Response to “NSW Biosecurity Bill falters at the finish line”