Affectionate, playful, mischievous, relentless, prowling, predator. Cat-lover or not, none of us can escape the devastating impacts they are having on Australia’s wildlife. Cats inhabit almost all of Australia and continue to drive many native species toward extinction.

Cats have caused more environmental damage in Australia than any other continent in the world.

They first arrived in Australia on the First Fleet in 1788 as companion animals and within 70 years covered the continent.

Sadly, Australian wildlife, like endangered numbats and night parrots, have proven particularly susceptible to feral cats and roaming cats (including pet cats that are allowed out to roam). Cats are the perfect hunter, being patient, silent and adaptable. Not only are so many of our native animals the perfect-sized prey for cats, they’re also at a big disadvantage since they aren’t used to being hunted by something like a cat.

According to the latest estimates, we’ve lost 33 native mammals since colonisation. Cats played a major role in 25 of those mammal extinctions.

Every Year Cats in Australia Kill ...

How We Lost the Other Bilby

The bilby is one of our national wildlife icons. But prior to the 1960s, there were actually two different species of the long-eared marsupials. The yallara, or “lesser bilby”, was a smaller and more feisty version of the greater bilby we know and love today. But, unlike its larger cousin, yallara didn’t survive the onslaught of cats and foxes that followed Australia’s colonisation.

The greater bilby is now close behind on its path to extinction thanks largely to feral cats and roaming cats. Once found across 70% of the continent, the greater bilby now numbers around 9,000 animals. 10% of their decline has occurred in the past 12 years alone.

How Many Cats Are in Australia?

At any given point in time, there are between 5.9 – 10.1 million cats spread across 99.9% of the continent. Cats can also increase their population sizes faster than their native prey. That means, following periods of high rainfall, the country’s feral cat population can quadruple. 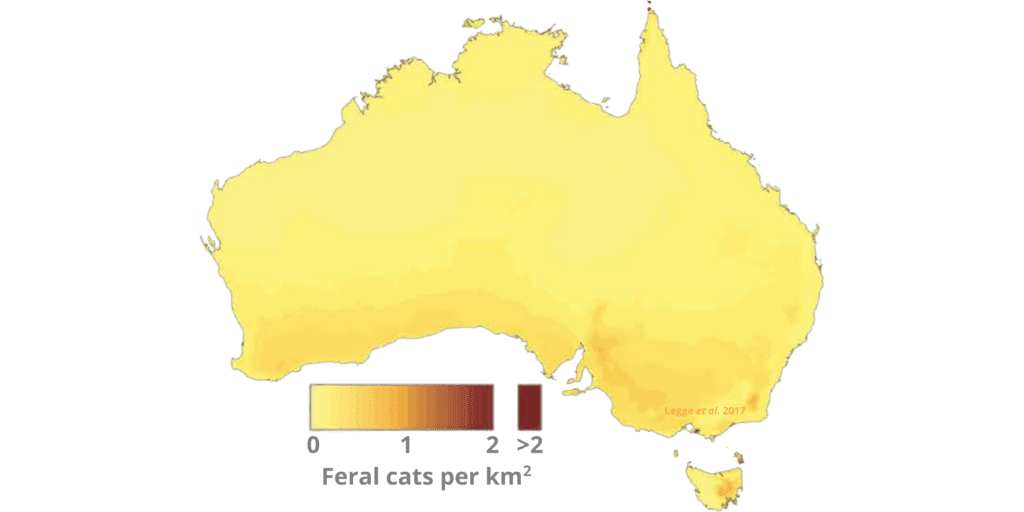 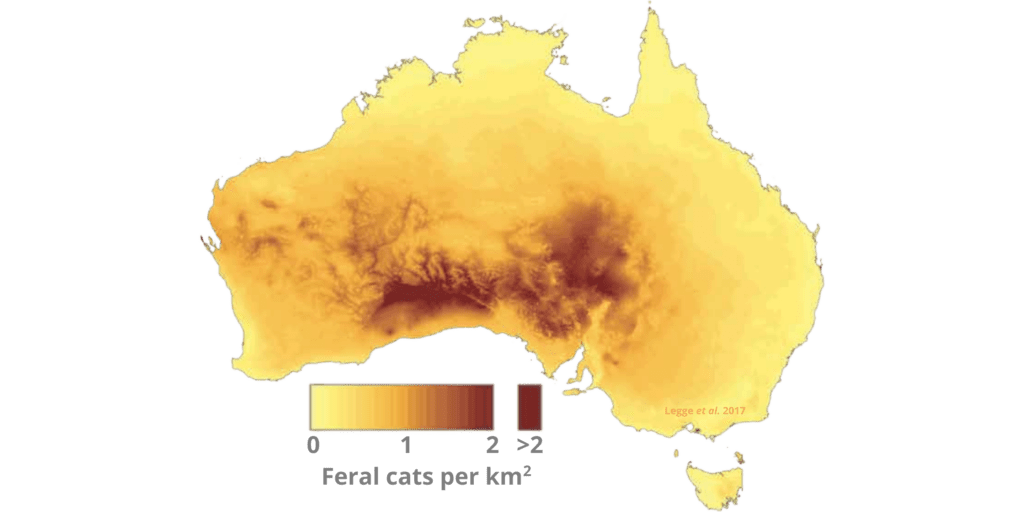 ‘Now, a new wave of mammal extinctions is looming across northern Australia, as intense fires and overgrazing by feral cattle, pigs and buffaloes remove shelter and make it easier for feral cats to hunt. … Often travelling long distances (up to 30km), cats target recently burnt areas for intensive hunting. An influx of cats can decimate the survivors of fire.’

The Dark Side of Cats

Free-roaming cats, both feral and pet, are highly efficient predators. On top of the 27 native species that cats helped push into extinction since colonisation, including the pig-footed bandicoot and the Macquarie Island parakeet, they now imperil at least another 123 nationally threatened species.

The stats are scary, and cats will continue to drive species toward extinction unless we intervene. Even a single cat can do a lot of damage.

How much damage can a single cat do?

In 2018, a marine ecologist was studying a nesting population of a few hundred threatened fairy terns in Mandurah, Western Australia.

But as eggs began to hatch in November, chicks that were getting recorded as healthy one day started turning up dead the next morning.

Residents nearby the colony, including one neighbour who stayed up all night to watch over the colony, began reporting sightings of a white cat. By mid-December, the cat had been trapped and removed.

But it was too late. All 111 nests in the colony ended up completely failing to produce a single chick that made it to the end of the nesting season.

The white cat was discovered to have been desexed but not microchipped or collared, indicating it was an abandoned pet.

Securing pet cats indoors, in enclosures or on a lead benefits native wildlife and also ensures their safety. Many Australian animal welfare groups and veterinary groups, like the RSPCA, have advocated for many years that pet cats are safer and happier at home.

The ACT Parliament has taken action and, as of 2022, broadscale cat containment is now law across the territory.

The federal government is also taking steps in the right direction and commenced a parliamentary inquiry into the impacts of feral cats and pet cats on native wildlife in 2020, which gained bi-partisan political support. The inquiry resulted in six recommendations for the Australian Government including:

What You Can Do

Be part of our active and growing community who are using their voice to help steer governments in the right direction.

Australia has the worst mammalian extinction record in the world and cats have contributed to two thirds of these species’ demise.

The science is on our side, but time is not. If there are more delays, half of our species on the endangered list will continue to tumble towards extinction.

We need your help to push for more effective control of feral cats, reduce the impacts from cats and ensure wildlife recovering from extreme weather events are safe from invasive predators.

Support our work in stopping further cat-driven extinctions in Australia.

Many of us believe our pet cats never kill animals because they only get let out at certain times or are too passive, lazy or slow to catch anything.

But even if your pet cat hasn’t brought native wildlife home, any cat allowed free-roaming time is almost certainly killing native wildlife. Research using tracking collars and scat analysis has established that the vast majority of animals killed by pet cats are not brought home. We also know 4 in 10 pet cats that are brought in at night sneak back out again to roam and hunt.

There are many things responsible cat owners can do to help keep our wildlife safe and our pets happy, but the most important one is to keep your cat securely contained at home or on a leash at all times just like a pet dog. This will keep them safe from injury and disease and protect native wildlife in your local neighbourhood.

Lucky Leo, living the high life of an indoor cat

Don’t be fooled by his slightly grouchy face. Leo is a healthy, safe and contented indoors cat, and an adored family member.

Australia needs stronger laws, policies and programs to prevent new invasive species and to eradicate, contain and control existing invaders. The Invasive Species Council is the only national organisation dedicated to tackling invasive species and closing the gaps in Australia’s biosecurity net to conserve our native wildlife.

We are also working to ensure that pet cats are kept safe at home, and that there is support through local, state and federal government for effective cat containment.