Will the Senate environment and communications committee accept there are systemic flaws in our environmental biosecurity systems? If they take heed of most of the submissions to the inquiry, they will.

These extracts from some of the 83 submissions support and reinforce many of the issues raised by the Invasive Species Council. To read the full submissions, download them from the inquiry website.

‘Australia continues to experience regular detected incursions of known environmentally important high impact invasive species a significant number of which go on to cause broad ranging environmental impacts. … detections and response planning rarely happens quickly enough to allow for a rapid response such as needed for eradication. A failed opportunity for eradication leads to either high long-term impacts or constant and significant long term management costs.’

‘Government departments and agencies responsible for the environment are struggling with reduced capacity to take full responsibility in decision-making and responses to new incursions that affect the environment. This area has traditionally been under the responsibility of Departments of Agriculture or Primary Industries. These agencies are however primarily focussed on direct agricultural, aquaculture and forestry threats.’

‘Biosecurity in Australia should better incorporate the impacts of invasive species on the environment and give them equal consideration to the impacts on agriculture and human health. … some of these recently arrived weeds, feral animals and diseases [such as myrtle rust, yellow crazy ants and four tropical weeds] could perhaps have been prevented, delayed or eradicated with more adequate resources and prompt responses … While Australia has developed contingency plans for major agricultural pests, we still need a similar set of contingency plans to defend against environmental pests, weeds and diseases.’

‘The Wet Tropics Management Authority supports the concept of a stand-alone environmental biosecurity body to work alongside the established Plant Health Australia and Animal Health Australia. This body should be appropriately resourced and empowered to focus on public-good environmental values. It should provide a long term ecological perspective and the application of the precautionary principle when assessing risks. It is vital to be able to present an expert and holistic perspective where commercial interests may conflict with potential environmental impacts.’

‘A recent independent assessment of management effectiveness for the Great Barrier Reef Region indicated that plans and procedures to minimise the risk of introduction, and the timely detection of and response to invasive marine pests are generally deficient.’

‘This [the spread of red imported fire ants from the Port of Brisbane] highlights a few deficiencies including: lack of contingency planning and action for high priority pests; lack of suitable surveillance protocols. … These detections [of red imported fire ants in 2006, 2011 and 2013, all probably arriving in mining equipment] demonstrate that the risk pathways are changing and that these are not being identified and acted upon in a timely manner.’

‘… the red imported fire ant program commenced treatment within a few weeks of confirmation of the ant’s identity, a remarkable achievement … It is unclear why five years later, with the same government bodies involved, there was a four-month delay between detection of the electric ant and its first treatment.

‘Implementation of the [Tramp Ant Threat Abatement] Plan…would enable a national, coordinated, and more proactive approach to addressing tramp ant incursions.’ The Tramp Ant Threat Abatement Plan ‘was signed in June 2006. But to date it appears very little, if any, of it has been implemented. Indeed if some of the high priority or very high priority short-term Action Groups had been acted upon … it is likely that the tramp ant incursions on Lord Howe Island and Norfolk Island and their threats would have been recognized earlier, and coordinated management could have commenced sooner and more efficiently.’

NSW Office of Environment and Heritage

‘The example of myrtle rust entering Australian in 2010 shows the significant risk of exotic diseases to the natural environment. … Potential impacts of myrtle rust were understood and documented well before the rust fungus arrived in Australia. This did not lead to proactive investment in prevention, despite the recognition that little could be done to prevent its spread once established, as myrtle rust can spread by wind. … [in responding to the myrtle rust outbreak] delays in decisions, certainty over funding and unclear responsibilities inhibited swift progress.’

‘[Environmental] stakeholders were not sufficiently familiar with what is essentially a biosecurity framework “owned” and populated by highly skilled agriculture-based biosecurity experts around Australia.’

‘Concerted efforts by the Australian Government to engage state and community environmental organisations in biosecurity arrangements would assist the management of environmental biosecurity.’

‘[The] area of environmental biosecurity is almost always treated as an ‘add on’ issue to that of primary industry, and is rarely explored in depth. … continued imbalance in resource allocation to agricultural and environmental biosecurity is unacceptable and against the national interest. … Improved involvement of stakeholders from the non-government environmental sector (both commercial and community-based) should be part of any new institutional settings, at both Commonwealth and State levels.’

‘Improved coordination across jurisdictions is needed to ensure that high-risk pathways are consistently addressed across borders so incursions can be quickly eradicated.’

‘Given the sheer number of avenues of entry into Australia, it is unlikely that quarantine measures will stop entrance of all exotic species. Strong surveillance and rapid response systems are needed Australia-wide to ensure that new incursions are quickly addressed.’

‘Appropriately, much has been made of invasive species’ impact on agricultural production and profitability: an environmentally and financially healthy agricultural sector is essential to an efficient and affordable food supply. However, similar effort is required for the natural environment, which provides Australians with unique biodiversity, community amenity and the basis of tourism and essential livestock-grazing systems throughout Australia.’

‘The suggestion from other submitters for a new organisation, Environmental Health Australia, is also a clear sign that a co-ordinating body is required as a matter of high importance to enable, among other things, productive discussion and effective decisions around essential elements of invasive species prevention, detection and/or control, including the perennial issues of funding and management.’

The Community and Public Sector Union

(reporting the result of a survey of 300 members).

‘Two thirds (65.6%) of CPSU members surveyed said that Australia’s biosecurity arrangements have become worse or significantly worse over the past decade due to declining standards and increasing risks.’ One member noted, ‘biosecurity and its messages have been subsumed in the new generic Department[‘]s focus on “farm gate” issues.’

The survey also found, ‘Nearly three quarters (71.3%) of CPSU members said that current biosecurity arrangements were inadequate or really inadequate to prevent the entry and establishment of invasive species. Over half said that Australia was unprepared or very unprepared for an incursion of an invasive species (56.7%). The most commonly cited weaknesses in the biosecurity system that allowed incursions to occur were inadequate biosecurity procedures and measures on pathways (67.9%) and budget cuts (67.9%), followed by risk-based intervention (55.6%).’

‘Diseases of wildlife that impact upon Australia’s biodiversity and environment are a low priority.’

‘There is an immediate need to bring environment into Australia’s wildlife health system.’

‘Threats to the environment are frequently relegated to a secondary status when pitted against economic interests. … The IAS [invasive alien species] regime needs to provide space for environmental concerns and also ensure that that these concerns are integrated into the regime’s institutional arrangements and decision-making processes.’

‘Currently, Australia lacks a dedicated information portal for IAS. … The establishment of one-stop information portals, accessible via the Internet, is a key feature of the IAS regimes in the US and GB [Great Britain].’ 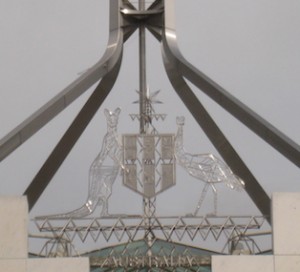