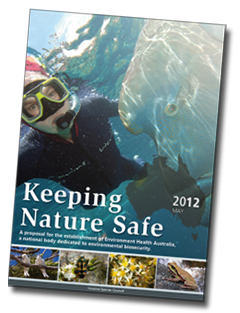 With a continued high rate of new invasive species arriving and establishing in Australia, it is clear we need a more concerted focus on environmental biosecurity priorities.

To help address this need, the Invasive Species Council, supported by 30 environmental NGOs, has proposed to the Senate inquiry the establishment of a national body – Environment Health Australia (EHA) – to bring together major participants in environmental biosecurity, effectively involve the community sector, and facilitate cross-jurisdictional, cross-sectoral collaboration.

One-third of the >80 Senate inquiry submissions supported the establishment of a body like Environment Health Australia. Just two were opposed to the idea (the federal government and the Nursery and Garden Industry Association), and the others didn’t mention the idea.

A similar collaborative approach with similar levels of public funding (see Tables 1 and 2 below), focused on environmental biosecurity priorities and with meaningful involvement of the community sector, would greatly strengthen Australia’s capacity for environmental biosecurity. Plant Health Australia recognised the advantages of establishing a similar independent body ‘to create the framework and coordination for partnerships to operate’ for environmental purposes.[2]

Interested in supporting Environment Health Australia? You too can endorse the proposal.

Proposed functions and membership of EHA

The functions of the proposed EHA could include the following:

Potential members of EHA include:

Not an industry body

Plant Health Australia and Animal Health Australia are not-for-profit companies to coordinate government-industry partnerships to protect plant and animal industries. The industry membership of these bodies is understandably unlikely to accord environmental threats the priority and specific focus they require. It is difficult to see how the wide variety of stakeholders in the community sector could assume an effective partnership role in these organisations, and there has been no consultation with the community sector about this.

The major impediment to the proposal for EHA seems to be financial. But failing to invest properly in biosecurity prevention is false economy given the high costs of invasive species (both in economic and biodiversity terms) and governments have invested millions of dollars in the industry bodies and continue to do so.

Given that improving environmental biosecurity is so critical to conservation and that it lags far behind that for industry, there is a strong rationale for governments to invest in a body focused on environmental priorities. Other potential sources of funding include development offsets, industry levies under the ‘polluter pays’ principle, philanthropic funding and memberships and in-kind support.

Over the 5 years to 2012-13, the federal government provided $22.6 million funding to Animal Health Australia and Plant Health Australia, an average $4.5 million/year (Tables 1 and 2 below). This includes membership subscription funding of $10.2 million and project funding of $12.4 million. State and territory governments in combination provided an equivalent level of membership funding, ie. $10.2 million over the 5 years to 2012-13. (They presumably also provide some project funding.) Industry paid a third of total membership funding ($10.2 million over 5 years).

Most groups in the community sector have limited capacity to contribute financially but EHA could potentially leverage considerable in-kind contributions. [4] The community sector already contributes substantially to management of invasive species threats. Respondents to a national survey of organisations managing invasive species threats included 485 community organisations providing $61 million of effort per year. By extrapolation, the annual value of the community effort was conservatively estimated to be in the order of $600 million and is likely to be much higher. [5]