Inquiry needed to prevent the next cane toad

Australia’s quarantine system is failing to keep out very damaging environmental invaders and our federal parliament should be seeking to determine why that is.

Of course, nowadays, Australia would never allow cane toads to be introduced. But judging by what else is making it through our borders, they would get here anyway.

In April, an Asian black-spined toad – probably just as bad as the cane toad – was found in a backyard in Sunbury, Victoria, 15 km from an entry point. And since 2000, many other really serious baddies with the potential to cause ecological mayhem have shown that Australia’s biosecurity system is full of holes.

This is why the Invasive Species Council is calling for a Senate inquiry into Australia’s state of preparedness for new environmental invaders.

The new ones include myrtle rust, which can infect hundreds of species in our largest plant family (Myrtaceae), a bird disease, an aggressive bee, a newt and several types of tramp ants. A recent repeat incursion of red imported fire ants could have put at risk the entire $300 million eradication program in Queensland.

Because new environmental incursions are so frequent and costly for biodiversity and economy, Australia’s parliament should be seeking to determine what is going wrong and what needs to change.

There has been almost no parliamentary scrutiny of failures in environmental biosecurity. Table 2 shows that since 2000 there have been 18 Senate inquiries into aspects of agricultural biosecurity plus a commission of inquiry into equine influenza (2007). An inquiry into Asian honeybees was relevant to the environment although it focused on industry concerns. Other than that, the only other environmentally relevant inquiry – into the Environment Protection and Biodiversity Conservation Amendment (Invasive Species) Bill 2002 – was more than a decade ago and did not investigate specific environmental incursions.

We think the failings in environmental biosecurity are due to multiple weaknesses:

Help us get a Senate inquiry

The Invasive Species Council thinks a comprehensive inquiry is essential to identify systemic flaws in biosecurity and recommend changes to strengthen protections for Australia’s natural environment.

You can help us achieve this in three ways.

Table 1. Examples of incursions detected since 2000 with high potential for environmental harm 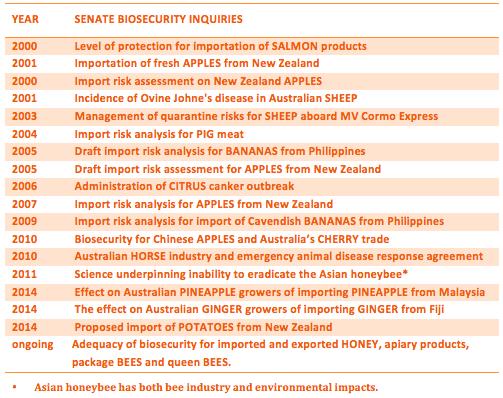 Arrival of the black-spined toad >>