The Invasive Species Council has expressed alarm at a recent finding of a new type of toad in an outer Melbourne suburb that tolerates cooler climates than the cane toad. The Asian black-spined toad could devastate native wildlife and, as the latest in a long list of breaches of Australia’s borders, it highlights serious systemic failings in environmental biosecurity.

“The Asian black-spined toad was spotted in the backyard of a Sunbury resident, sitting in a dog’s waterbowl. Sunbury is a Melbourne outer suburb 15 km southwest of Melbourne airport.

“The Asian black-spined toad, a species with all the insidious characteristics of its better known cousin, the cane toad, has never before been found in Australia outside of a major airport or waterside dock.

“If established, the Asian black-spined toad would multiply the destructive forces of the cane toad and open up a more southern invasion front.

“In the past decade, myrtle rust, Asian honeybees, smooth newts, pigeon paramyxovirus and new incursions of red imported fire ants and yellow crazy ants are just some of the other harmful organisms to have made it past our borders. This is a frightening failure rate,” said Andrew Cox, Invasive Species Council CEO.

“We believe that a Senate inquiry is needed to examine the causes of these failures and to investigate the state of Australia’s preparedness for new invasive species that could harm our natural environment.

“Marked by short brown to black spines on its upper body and sides, the Asian black-spined toad is widespread throughout Southeast Asia, and a relatively recent arrival in East Timor and Papua New Guinea.

“Just like the cane toad, the Asian black-spined toad has poison glands, eats a broad diet and is a prolific breeder. Females can produce 40,000 eggs at a time.

“The toad would compete with native frogs for food and habitat, poison many of its predators (such as snakes, goannas and quolls) and potentially spread new parasites and diseases.

“This incident is yet another that highlights serious flaws in the biosecurity system meant to protect Australia’s environment,” said Mr Cox.

“Federal and state governments are not properly investing in environmental biosecurity.

“As the cane toad shows, once a pest is established it is usually impossible or else extremely costly to eradicate or stop it spreading. 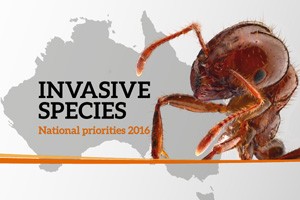