You are here: Home > No excuses left to ignore environmental biosecurity

With less than a month before it delivers its report, the Senate inquiry on environmental biosecurity has already been useful for several things. 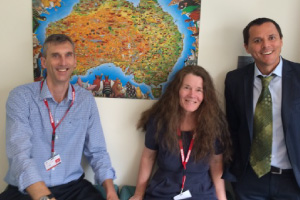 It has revealed gaping holes in Australia’s preparation for new invasive species and flushed out the views of government about our proposal for a dedicated body (like those that industry has) to prepare for invasive species.

One advisor to a recent Federal agricultural minister even seriously asked CEO Andrew Cox why conservation groups could not fund Environment Health Australia. He could only laugh.

The alleged lack of funds and unwillingness to create new bodies has strengthened under the new Coalition government in this period of severe budget cuts.

But the federal government does understand the value of investing in prevention when it comes to agriculture, even where it yields a largely commercial benefit. While turning down our proposal to invest in environment biosecurity, government continues to fund the industry bodies Animal Health Australia and Plant Health Australia with at least $4 million in federal funding each year supplemented by state and territory funding. This year the government has also supported the creation of a new specialist body, Wildlife Health Australia, that focuses on diseases of native and domestic animals that may become agricultural and human health risks.

At the inquiry’s hearings in Canberra, Department of Agriculture’s Rona Mellor said that the creation of Environment Health Australia ‘might cause harm’ because you are ‘disaggregating’ the current work into a ‘different governance model’. But there is almost nothing environmental in the existing work of those bodies to ‘disaggregate’.

Despite an increasing adoption of a risk-based approach since the 2008 Beale inquiry, there has been no methodical review of the risks that Australia’s environment is facing, no systematic scrutiny of the high risk pathways, no alignment of surveillance programs to look for priority environmental threats, no contingency planning and little bolstering of eradication responses, which have been half-hearted at best in response to many new invaders.

At the senate inquiry hearing, the federal government representatives were unable to supply a list of priority species and pathways for environment biosecurity, except to name two species that were ‘front of mind’. There is a list of 348 priority threats to crops identified through the work of Plant Health Australia, but no similar list for the environment and only a ‘top 6 that biosecurity scientists worry about’.

It is clear that Australia needs a much better system of environmental biosecurity. The excuses of no money or that the work is being done by industry bodies do not hold up.

Note: Since this blog was written the Senate inquiry was extended by three months, to report by 4 March 2015.