You are here: Home > Can the Norfolk Island parakeet dodge extinction once and for all?

Conservation of the Green Parrot on Norfolk Island.

The critically endangered Norfolk Island Parakeet (Cyanoramphus cookii) – known to locals as the Green Parrot – has the dubious honour of having to be rescued from the brink of extinction not once, but twice.

Found only on Australia’s Norfolk Island, north-east of Sydney, the population of this beautiful parakeet plummeted to just 32 birds in 1988 – making it one of the most endangered birds in the world. The main cause of this desperate situation was predation by invasive rats and feral cats and competition for nest-sites from introduced invasive parrots and starlings.

A recovery plan was soon put into place and by 2008 it was estimated that as many as 200 birds existed in total. The green parrot of remote Norfolk Island had been saved from extinction and bird-lovers around the world rejoiced at this success.

But, over time, complacency set in.

This is where Margaret Christian comes into the picture. Margaret is a dedicated local naturalist and by 2012 she was convinced the green parrot was once again in dire trouble. I made my way to Norfolk Island to see and hear for myself.

I was shocked by how few birds I saw and realised I would need someone who really knew how to survey this type of parakeet properly to convince decision-makers that it was in trouble again. Fortunately, such a person existed – Dr Luis Ortiz-Catedral from Massey University, a world-renowned expert on the closely related parakeets of New Zealand.

By November 2013, Dr Luis documented that there were between 50 and 100 green parrots on the island. Worse still, only 11 were breeding-age females. Island Conservation, together with our partners – Birdlife Australia, The Nature Conservancy, and the Norfolk Island Flora and Fauna Society – devised a plan to convince governments the green parrot was about to go extinct, for the second time in 25 years.

With Dr Luis’ rigorous data and recommendations, and the combined influence of our ad-hoc Green Parrot Recovery Team, we presented our case to decision-makers on Norfolk Island and the Australian Government in Canberra. Finally a letter arrived, the government agreed with our assessment and committed to implement all of our recommended actions.

Ranger to the rescue

But the good news did not end there. Abigail Smith arrived on Norfolk Island – a dedicated ranger with the skills to implement the recovery plan. Abigail and her team set about implementing the plan and within the first year the results were astounding. By September 2014, there were 78 predator-resistant nest sites for the green parrot and 11 active nests. Over winter 51 chicks fledged, of which 25 were female, by far the most productive winter breeding for the species on record. In November 2014, the Australian Government committed an additional $300,000 towards these efforts.

However, the future remains far from certain. A permanent solution is needed to completely remove the threat of feral cats and invasive rats from Norfolk Island. As the history of the green parrot shows, without the constant vigilance of people like Margaret Christian, it could be all too soon before the green parrot faces another, potentially final, crisis. 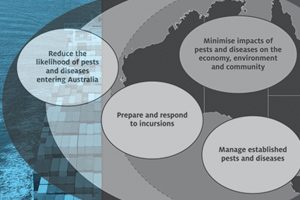