A new partnership between conservation groups is setting out to protect wildlife and restore ecosystems on Australian islands.

The partnership, announced last night at the fourth Island Arks Symposium on Norfolk Island, will see Island Conservation and the Invasive Species Council combining forces. The two groups will work on projects with local islanders to remove pest species such as rats, rabbits, ants and cats to save important native wildlife. 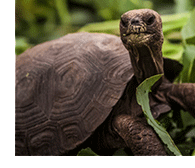 Images for this story must be credited if used, and can be downloaded from our online media resources page >>

Around one-third of Australia’s threatened animal species call islands home and many island species are found nowhere else on Earth. Islands are the last refuge for a number of animals now extinct on the Australian mainland. For marine turtles and seabirds, islands are essential to their existence.

“While the Invasive Species Council is primarily interested in preventing new pest species from establishing in Australia, we can see an incredible opportunity to conserve some of Australia’s most unique ecosystems by working with Island Conservation.”

Island Conservation is an international organisation dedicated to the prevention of extinctions by removing invasive species from islands.

“Australia recently completed one of the world’s most important island eradications on Macquarie Island. The removal of rabbits and rodents resulted in the recovery of the island’s ecology and numerous seabird species. We are hoping to encourage communities and governments to replicate these efforts on other Australian islands.

“Governments will always have a key role to play in conserving our island wildlife, but this innovative new partnership will allow our organisations to accelerate work to protect threatened island species,” Mr Cox said.

“Our funding comes from donors. This allows us to act far more quickly than government often can. We’re now looking for new donors to help support the Australian islands partnership.”

The fourth Island Arks Symposium is being held on Norfolk Island 20-27 February and will focus on a range of themes including conservation tourism, new advances in pest control and eradication, links between marine and island translocations.

Norfolk Island is in the southwest Pacific, 1400km east of mainland Australia, and has strong ecological affinities with New Zealand.

It is a globally important biodiversity hotspot and has been designated as an ‘Important Bird Area’ by Birdlife International. It is home to the endangered Norfolk Island green parakeet.

The Invasive Species Council is a not-for-profit organisation that campaigns for stronger laws, policies and programs to keep the Australian environment safe from new weeds, feral animals and other invaders.

Island Conservation’s mission is to prevent extinctions by removing invasive species from islands.