The review will look at priorities and gaps, potential funders and ways to build best-practice responses to new disease and pest outbreaks.

The Invasive Species Council and the Queensland Conservation Council prepared a joint submission arguing that environmental biosecurity needs more attention. The review is due to report to the government in September.

Preparatory work continues on the Queensland Biosecurity Act, due to come into effect in July 2016. The legislation contains important measures such as the general biosecurity obligation, which imposes responsibilities on all individuals and organisations that may create biosecurity risks.

Subscribe to Biosecurity Queensland updates about the Act to stay informed.

The NSW Biosecurity Bill returned to the NSW Parliament in August in largely the same form as the 2014 version without the package of amendments previously agreed between NSW Farmers, environment groups and the Coalition government. By the end of August, eight sets of amendments had been proposed in the upper house, including those previously accepted by the government in 2014. Debate on the Bill will continue in mid September.

The NSW Government is set to conduct a review of pest management in NSW, fulfilling a government commitment made prior to the March 2015 election. We believe the review will be modelled on the highly regarded NSW weed management review conducted by the NSW Natural Resources Commission in 2014.

Myrtle rust continues its spread across Australia. It was detected for the first time in the Northern Territory on Melville Island in July. The government decided there is little that can be done to prevent its further spread. There is the danger that myrtle rust could find its way via timber exports from plantations on the island to rust-free countries.

An isolated colony of browsing ants, a dangerous ant capable of forming super colonies in the same way as fire ants and yellow crazy ants, was found at Darwin Port in August. The colony is being eradicated. Just days later, the aggressive Asian tiger mosquito was found at the port. This insect can carry diseases such as dengue fever and poses a serious human health risk.

The NT Government has released a draft biosecurity strategy and is accepting comments until 7 September. The final strategy will be used to develop new biosecurity legislation.

The Invasive Species Control Bill that failed to pass the Victorian Parliament in 2014 is set to return in early 2016 after targeted consultation. The Invasive Species Council recently met Victorian agriculture minister Jaala Pulford to suggest improvements to the Bill such as a permitted list approach that would stop the introduction of weedy plants. 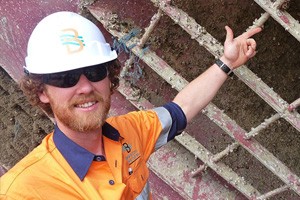