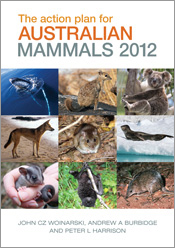 The Action Plan for Australian Mammals 2012 has revealed that feral cats are the single greatest cause of terrestrial mammal extinctions in Australia and, along with inappropriate fire regimes and the red fox, are the greatest current threat to the many species of threatened mammals.

The Australian mammal fauna is the most distinctive in the world. It is quintessentially Australian. With 86% of mammal species occurring nowhere else, our responsibility to conserve them cannot be delegated to any other nation. But more so than any other component of Australian biodiversity, the mammal fauna has been diminished by the medley of factors brought to this country since European settlement a little more than 200 years ago.

The Action Plan is the first comprehensive review of the fate of all Australian mammal species and subspecies. A key finding is that 28 Australian endemic land mammals – more than 10% of the original tally, and substantially more than previously recognised – have been rendered extinct since 1788. These losses have occurred continuously, with an ongoing rate of about one mammal extinction per decade since the 1840s.

We assessed status in 2012 and retrospectively in 1992 and 2002. More than 200 experts provided feedback on draft accounts for all taxa evaluated as Extinct, Threatened (Critically Endangered, Endangered, Vulnerable) or Near Threatened. Our mammal losses are continuing, with the extinction of the Christmas Island Pipistrelle in 2009, and the likely extinction of the Bramble Cay Melomys, largely due to neglect, in the last few years.

On current trends, there will be many more extinctions of Australian mammals in the next one or two generations.

This degree of loss of Australian mammals has also been far more than that reported over this period for the terrestrial mammal fauna in any other continent.

Some 1.5% of the world’s 5500 mammal species are extinct; the figure for Australia’s terrestrial mammals is 9.2% and for endemic species 10.6%. The decline is accelerating. Using retrospective evaluations based on current information, the action plan found that 55 taxa had a worsened conservation status between 1992 and 2012.

During the preparation of the Action Plan, we identified, using published literature and expert elucidation, the major threats that had caused or were strongly suspected to have caused extinction and significant species decline. These were rated according to severity and extent.

The resulting threat scores of moderate and above were tallied across groups of taxa of different conservation status, and averaged across the number of taxa in different threat categories. The results revealed that predation by feral cats (Felis catus) were the major cause of terrestrial species’ extinction and that feral cats and exotic red foxes (Vulpes vulpes) were the major causes of recent declines.

These primary causes are different from the main factors driving biodiversity loss elsewhere in the world: habitat loss and hunting. Seven species once widespread on the Australian mainland now remain naturally only on islands where exotic predators are absent.

Inappropriate fire regimes also rated highly for currently threatened taxa. These major threats interact: large, hot fires remove cover making the predators’ job easier; dingoes seem to suppress fox numbers and both dingoes and foxes affect cat numbers. However, while it is good management to maintain dingo numbers in conservation areas, unfortunately this has not been enough to prevent extinctions, especially in arid parts of Australia.

It’s not all bad news. Some species have recovered or are recovering.

The small number of terrestrial species and subspecies that the mammal action plan evaluated as having improved conservation status between 1992 and 2012 are all due to reduction in predation pressure. This has been achieved either through extensive fox baiting, as has been done in the south west of Australia under project ‘Western Shield’ [3] for decades and which is now being done elsewhere such as Victoria’s ‘Southern Ark’ and ‘Bounceback’ in South Australia, or through translocations to predator-free islands or ‘mainland islands’—fenced exclosures from which cats and foxes have been removed.

The Australian Wildlife Conservancy [4] has led the way in developing fenced predator-free areas and now manages the largest populations of several threatened mammals in different sanctuaries around Australia. Other organisations and government agencies are also using exclosures. Similarly, some marine mammal species have improved conservation status as a result of cessation of whaling and hunting that led to over-exploitation.

Management actions have also led to the decline of other mammals ceasing and populations of several have been stabilised or have started to increase. For example, Gilbert’s Potoroo, evaluated as Critically Endangered, will probably qualify for a lower threat category this year, because new populations have been established on Bald Island, off WA’s south coast, and in a fenced mainland island and numbers of mature individuals will have exceeded 50 for more than five years. The recent rapid decline of the Woylie may have ceased due to the establishment of a new populations within a fenced area.

The way forward is clear. Australia needs to do more to conserve its unique mammals.

The single greatest benefit would result from the development and application of technology that eradicates (or greatly reduces numbers of) feral cats without affecting non-target species. The longer term goal must be the development of technology to effectively remove the two key alien predators, cats and foxes, from the Australian landscape. Better fire management is also needed.

Could one of these 5 insects be Australia’s next varroa mite?