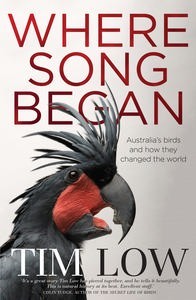 Back on the speaking circuit more than a decade after he wrote Feral Future Tim Low is noticing that audience responses to his new book, Where Song Began, are very different.

When Tim talked about the invasive species disasters detailed in Feral Future he had the polite attention of audiences willing to hear how bad things are but no enthusiasm for the information. A couple of people even approached him saying ‘Thank you for writing Feral Future, it was so depressing.’

“It’s as if I had turned a boat around and was flowing with the current instead of paddling upstream,” says Tim.

“A difficulty for the conservation movement is that many people feel so troubled by their own problems or by social issues that they don’t want to hear about the difficulties wildlife faces.

“Conservationists are by definition convinced that the environment faces threats, but even they can be reluctant to learn about invasive species if their quota of concern is exhausted by worries about habitat loss and climate change.”

“In saying that I am trying to increase awareness about invasive species without making the world seem a worse place, by shifting blame for the extinctions from climate change to the real problem,” he says.

“If there is a lesson in what I am finding during talks it is that invasive species messages will go down better if good news is included.”

Although invasive species keep getting worse as more species spread, there are good news stories – about biological control successes, eradications and better regulations.

“Some pest species reach a peak over time than decline as they come under attack from predators and parasites. Brisbane has fewer cane toads today than 40 years ago,” says Tim.

His bird book, Where Song Began, does touch on some invasive species problems.

He  mentions flammable introduced grasses (gamba grass, buffel grass, giant reed), the role of birds in spreading camphor laurel, blackberries and hymenachne, and the problems faced by seabirds when rats and other mammals reach their islands. Exotic mammals have caused many bird extinctions in New Zealand and exotic diseases have made Hawaii the bird extinction capital of the world.

“I hope that those who like the bird book are motivated to read Feral Future, less cheerful though it may be, and that they support the Invasive Species Council, the group dedicated to tackling Australia’s invasive species problems.”

Where Song Began: Australia’s Birds and How They Changed the World was written by award-winning author of Feral Herald Tim Low. This is an eye-opening book on the unique nature of Australian birds and their role in ecology and global evolution.