Invasive species: Where the parties stand at the 2019 Australian election

Invasive species are one of the biggest drivers of environmental loss in Australia, and threaten our native animals and plants more than any other single factor.

Analysis by 12 ecologists released earlier this year revealed the extent of the problem. Invasive species are driving more than 80 per cent of our threatened native species towards extinction. They are the threat affecting the most species.

The problem is set to get worse unless Australia takes decisive action.

To help you make your choice in the upcoming federal election, here’s how we rate the major parties for their performance and promises on tackling invasive species: 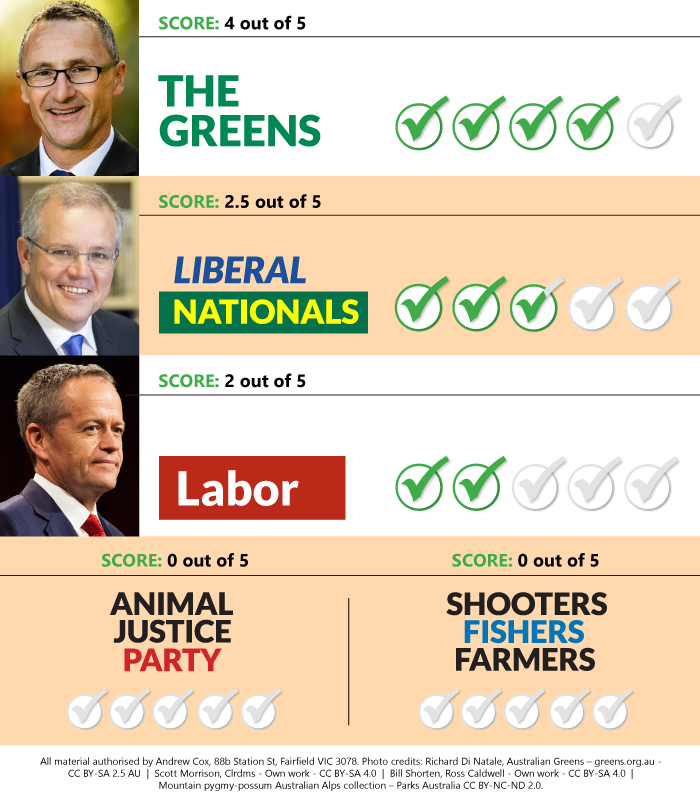 We’re rating the Greens as the strongest with 4 out of 5 points, the Coalition next at 2.5 and then Labor with 2. No other party warrants a score.

The Greens support structural reforms to biosecurity that would bring about a more independent, risk-based system as well as supporting and funding many of the initiatives sought by the Invasive Species Council.

The Coalition scored well while in government. They drove reforms arising from the five-yearly review of biosecurity and for the first time overtly recognised the special needs of the environment in the national biosecurity system. These reforms will result in important improvements for environmental biosecurity.

Labor when last in government gave little attention to environmental biosecurity but is not opposing recent reforms proposed by the Coalition and has promised funding to address on-ground invasive species threats.

Both Labor and the Coalition failed to support most of the new initiatives proposed by the Invasive Species Council that would strengthen environmental biosecurity by stopping new species arriving and establishing and limiting the harm caused by the worst of our established invasive species.

We have scored the Animal Justice Party and the Shooters, Fishers and Farmers Party as 0 out of 5 because most of their biosecurity policies either undermine or oppose action on invasive species. Other minor parties have no clear invasive species policies.

How the parties were rated

The Invasive Species Council looked at two things when rating the parties.

For the two major parties, Labor and the Coalition, we looked at their track records when last in government.

For all parties rated we looked at their written policies and public statements and measured the extent to which they address the 28 priorities in our Protect Australia from Deadly Invasive Species plan. This considers new initiatives but does not consider other proposed improvements in biosecurity that may be beneficial to the environment.

Our plan seeks new action and funding in the following priority areas:

The Greens have proposed a $140 million invasive species control initiative under their Nature Fund. This includes:

The Liberal National coalition in government has progressed biosecurity and invasive policies, largely centred on agricultural industries, but has actively developed environmental biosecurity programs, which is a significant breakthrough.

The five-yearly review of the national biosecurity system that concluded in June 2017 formed the basis for the Coalition government’s improvements to the system focused on stopping the arrival of new invasive species. Key initiatives include the new biosecurity import levy, which will raise about $120 million each year, and a permanent chief environmental biosecurity officer.

The $20 million in new funding that established the Centre for Invasive Species Solutions in 2017 was welcome but remains focused on established vertebrate animal pests. The Coalition has provided leadership in investing in the eradication of invasive ants. The Coalition led efforts to secure $411 million from national, state and territory governments for red fire ant eradication. The 2019-20 budget included $18.3 million extra for red fire ants, $9.2 million for yellow crazy ants (three years only) and $1.3 million for Argentine ant eradication from Norfolk Island.

There has been little new on-ground work on established environmental pests since the 2016 election. The momentum of the feral cat threat abatement plan created in 2015 has slowed. There has been little work to systematically address other major national invasive species threats by the environment department and there is no commitment to rectify this.

Labor’s policies are disappointingly weak or vague on invasive species threats to our natural environment. Their agricultural policy has not been released so it is unclear what is planned for preventative biosecurity and newly arrived invasive species. When last in federal government up to 2013, Labor made little progress on environmental biosecurity.

The policies of the Animal Justice Party and the Shooters, Fishers and Farmers Party cover some aspects of biosecurity, but these policies are generally counter-productive to reducing the threat from invasive species.

We are not aware of any minor party contesting the federal election with election policies addressing any of the issues covered in our Protect Australia plan.

The Animal Justice Party opposes killing feral animals, even if humanely done, and fails to acknowledge the seriousness of the invasive species threat to native wildlife. They ignore science and propose ineffective solutions. The Shooters, Fishers and Farmers Party opposes coordinated action to prevent the spread of pest animals popular for hunting such as feral deer and favour the use of recreational hunting for pest animal control but do support action on feral horses in Kosciuszko National Park.