Is Victoria smart enough to declare deer a pest? 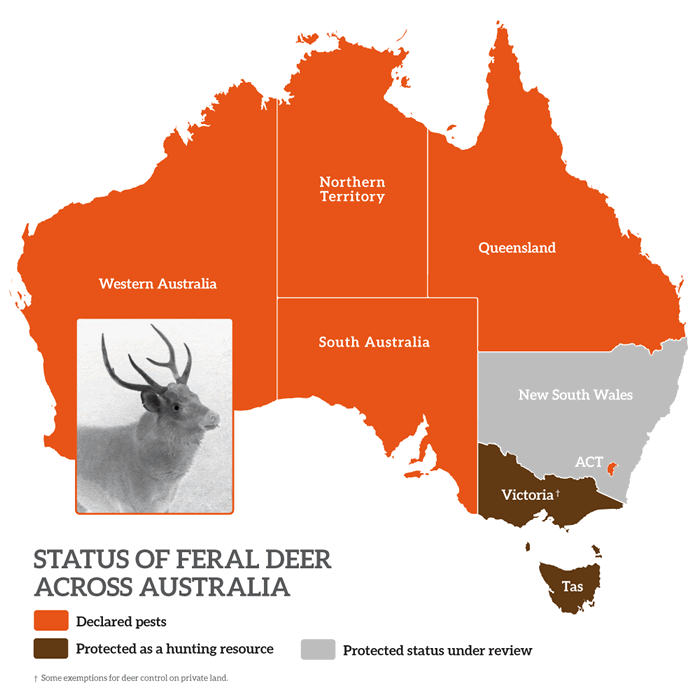 The rising numbers and growing impacts of feral deer is one of eastern Australia’s worst pest animal issues.

As the diagram above shows, deer are listed as pests across most of Australia. In NSW their status is under review due to their impacts on the environment, national parks, farms, the economy, infrastructure and even road fatalities.

And yet in Victoria management of feral deer has been distorted by deer’s treatment as a game animal for recreational hunting, instead of acknowledging their serious environmental, agricultural and social costs and listing them as pest species.

While the impact of different types of deer varies, all deer are exotic animals with hard hooves, voracious browsing habits and other characteristics that are not compatible with healthy natural ecosystems in Victoria.

Environmental impacts of deer include:

Numbers of most of the six deer species in Victoria have been growing rapidly in recent years. The population of sambar, the largest deer which weighs about 200kg, is the most widespread and thought to be in the hundreds of thousands. Their range is spreading to cover most of the forests of the Central Highlands and Gippsland and sambar were found in Wilsons Promontory National Park for the first time this year, joining the park’s large hog deer population.

Hog deer populations are concentrated in coastal areas of eastern Victoria. Red deer are in high numbers in the Grampians with smaller outlying populations. Fallow deer are found in large numbers in the Otways and the forests adjacent to South Australia, while chital and rusa deer are yet to establish significant populations.

It is critical to address the ecological effects of feral deer promptly to arrest the impacts on native species. Done well, nature conservation is as much about avoiding impacts as it is about reversing impacts and restoring populations of indigenous species already in decline.

The hunting lobby says more hunting equals better pest control, but we know hunting does not provide effective reduction in feral deer numbers. Though skilled volunteer shooters can be part of a mixed toolkit for professional public land managers, recreational hunting is not the solution to Victoria’s huge deer problem.

In April this year the Victorian Parliament set up an inquiry into the use of hunters for feral animal control on public land. We fear this is part of a push by the Shooters Party for hunting in all national parks under the guise of environmental benefits. The committee is made up of three Labor members, two Liberals, one National and one Shooter. There is no Greens participant.

The Invasive Species Council was invited to provide evidence on the first day of hearings early in September. In our submission to the inquiry we called for deer to be listed as a pest animal in Victoria, for the Game Management Authority to be abolished, and for a statewide deer containment strategy to stop these pests spreading and wrecking more of Victoria’s environment.

The inquiry will report to Victorian Parliament by 30 Mar 2017.