You are here: Home > Missing in action: our new biodiversity strategy

While the strategy sets out the broad goals of government and how progress will be measured, it fails to define what progress looks like or how it will get there. For addressing invasive species, the greatest threat to Australia’s plants and animals alongside habitat loss and climate change, this approach will perpetuate the lack of focus that has hampered progress over the last decade.

The new strategy, Australia’s Strategy for Nature 2019-2030, recognises invasive species as a major threat, but fails to set out clearly how this threat will be addressed.

All objectives, no actions

It is hard to see what implementation looks like since there is no target and no mention of actions, just objectives and performance measures.

Under goal 2, ‘Care for nature in all its diversity’, one of the five objectives is to‘Reduce threats and risks to nature and build resilience’.

This hardly clarifies how the biggest threats facing biodiversity will be addressed.

In relation to invasive species, there is no target, but instead two performance measures for this objective:

The performance measures are meaningless without a target and appear to measure the wrong result. These measures will record management effort, but not necessarily Australia’s progress with reducing the extent, number and impact of invasive species themselves.

So how does the strategy say it will deliver the promised goals and objectives? The strategy has a section on ‘How we will get there’. It focuses on leadership and direction-setting, evaluation and reporting and a new web portal for reporting progress called Australia’s Nature Hub. This section covers a page and remains general. The whole strategy is devoid of actions and activities except those relating to reporting and sharing information.

Better than the last ten years?

The last ten years of invasive species prevention and management has not been helped by the previous biodiversity strategy for the preceding decade.

While invasive species featured more prominently in the 2010-30 plan they were also without specific actions. At least it had a specific target.

There was a 320-word section on invasive species since they were rated as one of the six primary threats to Australia’s biodiversity. Invasive species was target seven of the strategy’s ten targets. This target was ‘By 2015, reduce by at least 10% the impacts of invasive species on threatened species and ecological communities in terrestrial, aquatic and marine environments.’ This arbitrary and difficult to achieve target was rendered meaningless since during the following ten years there was never an attempt to provide a baseline of impact, nor specific plans developed and funded to significantly reduce invasive species impacts. With the exception of the good progress over the last couple of years, measures to eradicate and contain environmental harmful invasive species were weak.

The 2010 strategy’s actions failed to directly deal with invasive species. Invasive species received no special mention where it mattered. Under the subpriority that seeks to reduce threats to biodiversity, there was an outcome: ‘reduction in the impacts of significant invasive species on biodiversity’ yet there was no specific action to give effect to this. Instead there was a reliance on biosecurity reforms proposed in 2008 and the national pest and weed strategies which were themselves weak on action and didn’t cover the full range of invasive species threats.

A strategy worth having?

The new biodiversity strategy is aspirational. It has useful ambitions that encourage Australians to connect with nature, care for nature, and share and build knowledge. But a good strategy needs to drive results.

Addressing wicked problems like the threat of invasive species require concerted programs and collaborative long-term strategies. Other government strategies like those relating to biosecurity and pest and weed management will assist, but the biodiversity strategy does nothing more that state the problem and a desire to fix it.

Australia’s Strategy for Nature 2019-2030 is hardly worth having without a government program to implement it.

One Response to “Missing in action: our new biodiversity strategy” 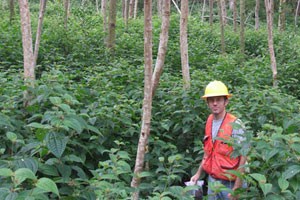