Koster’s curse – time is on our side

Koster’s curse has been described as Australia’s new lantana. A slow growing, invasive weed it smothers pastures and the native understorey of tropical rainforests.

It poses a threat to agriculture and the rainforests of our wet tropics. In Hawaii it has smothered everything in its path and forced landowners off their land – a bleak outlook for Australia’s beautiful wet tropics.

In Australia the original infestation has been contained just south of Port Douglas in Julatten through the tireless efforts of the Mitchell River Watershed Management Group, Mareeba Shire Council and local landowners. Diligent surveillance and the use of trained contractors has prevented new seeds from being produced and dropped.

Outreach Officer Shannan Langford Salisbury has just returned from a visit to see their work.

Since 2002, efforts to contain and eradicate Koster’s curse had been funded through the ‘four tropical weeds eradication project’, with over 80% of the money coming from the Queensland and federal governments, the rest from NSW, Northern Territory and Western Australia. In 2011, funding was boosted to $1.5M to maximise the chances of eradication.

Then last year, without any consultation and despite the tireless efforts of locals in combating Koster’s curse, the funding was turned off.

The Invasive Species Council has been told the discovery of a new Koster’s curse infestation 135km south in Wooroonooran National Park had created enough doubt about the chances of eliminating the smothering weed that funding should be completely withdrawn after a one-year ‘transition to management’ phase.

It was not known how the Koster’s curse infestation took hold so far from the original outbreak zone.

But should this uncertainty end eradication efforts?

By halting eradication, the weed will spread through the region’s river systems to infest large parts of the 72,000km2 Mitchell River catchment area and ultimately large areas of Northern Territory, Queensland and NSW.

The Wooroonooran infestation now appears to be an isolated incident – no new infestations have been found. Biosecurity Queensland are doing genetic tests to see if it is related to the Julatten population.  Most likely, and hopefully, Wooroonooran was the result of accidental transportation by people, and not a sign that Koster’s curse is now beyond control. 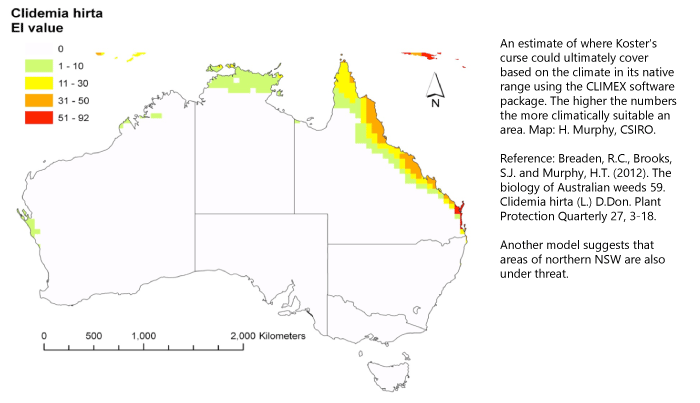 Time is on our side

Thankfully, time is on our side. Koster’s Curse is slow growing, it took 50-80 years to establish in Hawaii, and Mitchell River Watershed Management Group has shown that it is possible to contain a large infestation and work towards eradication.

Private contractors, Mareeba Shire Council and Biosecurity Queensland have the capability and capacity to eradicate the Julatten infestation. If the state and federal governments move hard and fast there is hope we can tackle the Wooroonooran National Park infestation as well.

Ian Adcock, Chair of the Mitchell River Watershed Management Group, has already warned that if we fail to fully fund eradication of Koster’s curse we’ll end up spending ten times more just protecting key assets from being over-run. The real cost is likely to be many orders of magnitude greater.

The Invasive Species Council has teamed up with the Mitchell River Watershed Management Group to work on addressing the loss of eradication funding. We will write to the National Biosecurity Committee requesting a rethink on halting the eradication. The new infestation should have triggered a more thorough process that considered the costs and the benefits.

We have the will and the capacity to stop Koster’s curse, but if we don’t act now it will be at the cost of wet tropics rainforests and local industry.