You are here: Home > Environmental biosecurity. It’s back on the agenda

Key speakers at the second national environmental biosecurity forum held at Canberra on 29 June 2017: Matt Koval and Jo Laduzko from the Biosecurity Policy and Implementation Division of the Department of Agriculture and Water Resources (left), Andrew Cox, Invasive Species Council CEO and Paul Murphy, Wildlife Trade and Biosecurity Branch of the Department of Environment and Energy (right).

“Environmental biosecurity is back on the agenda.” Those were the words of CSIRO Research Director Andy Sheppard at a key biosecurity forum held late last month.

A day earlier the federal government had released its long-awaited response to the 2015 Senate committee inquiry into environmental biosecurity. Filtering through the system are two major reviews of national biosecurity that have recognised the gaps in a system meant to protect the environment. Momentum is now gathering.

These small but important steps are dividends of our work at the federal level highlighting the regular incursions of new pest species in Australia that go on to harm the environment and the historically poor responses from state and federal governments.

Experienced parliamentary watchers may expect us to be grateful to even receive a government response to a Senate committee inquiry (only half of the environment and agricultural inquiries from 2015 received a response). Instead, we expect a lot more.

No alternative to Environment Health Australia

The biggest disappointment was the lack of a credible alternative to our proposal for Environment Health Australia. This collaborative body would work to prevent the arrival into Australia of new environmental pests and diseases and develop effective responses to new incursions.

The federal government recognises that some aspects of environmental biosecurity ‘pose unique difficulties’, but suggests the best approach is to strengthen Australia’s existing institutions rather than create new bodies.

Without Environment Health Australia or an equivalent collaborative arrangement between the federal and state governments and environmental stakeholders, we fear this important work will continue to inch along.

The inconsistency of the federal government was made apparent during the Senate inquiry when it created a third specialist body, Wildlife Health Australia (transformed from the Wildlife Health Network). Despite its name, this body is funded mainly to focus on diseases of concern to human health.

Environmental biosecurity is very challenging and should not be treated merely as an add-on to existing agricultural focused biosecurity systems.

The Senate inquiry recommendations supported by the government mostly represent small steps forward and have plenty of wriggle room. Despite this, it is reassuring to see new activity within the agriculture department specifically to address environmental biosecurity.

An agreement to implement the 2006 invasive ant threat abatement plan is welcome. This would best be done by updating the plan and integrating it with the invasive ants biosecurity plan presently under rapid development.

There was agreement that standardised labelling, weed identification and sales tracking protocols will be introduced for the horticulture industry. This will be done through a sub-committee of the Plant Health Committee responsible for interstate trade. It is unclear whether this will effectively limit the sale of weedy plants.

While we were disappointed that an important recommendation to prepare ‘a national priority list of pests and diseases not yet established in Australia that are of environmental biosecurity concern’ was merely supported in principle , government announced at the June forum that it would begin a two-year project run by ABARES to identify and prioritise environmental biosecurity risks and pathways.

This work would complement our joint work with Monash University to prioritise risks and pathways for exotic insects and plant pathogens that may impact on the environment. Together, these projects will form an important foundation for building a risk-based biosecurity system to protect the environment.

The other recommendations supported by government relate to the northern Australia quarantine strategy, improved targets for invasive species in the national biodiversity strategy and changes to the emergency response measures described below.

An independent review of how Australia protects itself from dangerous new invasive species has finally recognised the fact that we don’t pay enough attention to environmental pests and diseases.

The five-year review of Australia’s national biosecurity arrangements (the Intergovernmental Agreement on Biosecurity) could lead to a major shake-up. It called for environmental agencies at the state and federal level to play a ‘far stronger and direct role’ in most aspects of the system.

It pointed out that ‘national environmental pest and disease risks are yet to be systematically identified, prioritised and planned for’.

We strongly endorse five of the six environmental recommendations, including:

The sixth recommendation was that the existing agricultural bodies, Animal Health Australia and Plant Health Australia, should undertake the work needed to better prepare Australia for environmental incursions.

This is unrealistic. It would require agreement from the agricultural industry partners in those bodies. The environment would understandably be a low priority for them and community representatives would probably not be meaningfully involved in the work. It fails to acknowledge the differences between environmental and agricultural biosecurity.

There is no doubt the draft report contributed to the increased activity we are already seeing on environmental biosecurity in Australia.

The big question is whether the proposed structural reforms relating to the environment will be implemented. For this to occur they must overcome a major hurdle. The decision of state and federal governments on whether to adopt the review’s recommendations will predominately be made by agricultural ministers and agricultural departments.

The final review report will be publicly released at the meeting of state and federal agricultural ministers in late July.

Review on responses to new invaders

Another major review relevant to environmental biosecurity is also in its finishing stages.

The federal and state governments are currently considering their response to a review by KPMG of the National Environmental Biosecurity Response Agreement (NEBRA).

This 2012 agreement sets out how governments jointly respond to new environmental incursions. It is triggered under limited circumstances for serious invaders that aren’t of major agricultural concern, and can lead to national cost sharing for eradication efforts.

We have been highly critical of NEBRA. The restrictive criteria mean the agreement is rarely triggered, and only for the worst invasive species like red fire ants.

Missing is a precautionary approach. The level of certainty required for decisions is inappropriately high given the potential for severe and irreversible harm to the environment coupled with a general lack of information about the impacts of environmental invaders and techniques for eradication.

Failure to apply a precautionary approach resulted in the rejection of the smooth newt as a target for eradication and the premature abandonment of myrtle rust eradication (the latter was done under an industry deed).

Eradications only proceed if it can be shown that benefits outweigh the costs even though there is no agreed methodology for valuing environmental benefits. This becomes a barrier to action unless eradication also has social and agricultural benefits.

The government response to the 2015 Senate inquiry endorsed the need for a method for environmental benefit-cost analysis. Given the inevitable limitations of any such method, we advocate that it not be a precondition for eradication.

We seek much greater transparency and accountability. Such is the opacity of decision-making  under NEBRA, we were unable to even access a a full list of species that had been considered for eradication.

In the case of the smooth newt, we found out about the incursion by accident a year after it was detected and had to resort to a freedom of information request for details.

Our detailed submission called for majority rather than consensus decision-making and for the industry agreements not to supersede NEBRA for major environmental threats. Since any delay in responding can make the difference between success and failure, the arrival of high priority environmental pests should automatically trigger the agreement.

Given that most states have ad-hoc eradication response strategies and limited capacity, an effective national agreement is vital to stopping new invasive species permanently establishing in Australia.

The final review report was handed to state and federal governments in June and remains secret. 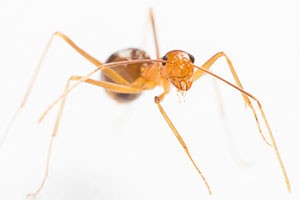