Animal eco-warriors to the rescue

Environmental writer Nic Gill has written something unique, says Tim Low – a children’s book with biosecurity as its major theme.

Animal Eco-Warriors tells the true stories of animals operating at the frontline, helping people resolve environmental problems. We meet biosecurity beagles at Hobart airport, sniffing out contraband that may harbour invasive species or diseases. We see Clay the terrier, making sure Tasman Island, the site of a cat eradication, really is cat-free. We learn about dogs in Kosciusko National Park sniffing out orange hawkweed, a highly invasive weed that is currently rare but could spread to cover large areas.

New Zealand has an ant-sniffer dog working to keep the Treasured Islands free of Argentine ants and for something very different the book shows how micro-wasps on Christmas Island are helping reduce crazy ants by attacking the scale bugs the ants feed from.

The book contains stories that don’t include pests, such as bomb-sniffing rats in Africa, but most of the examples are about biosecurity.

This is a very appealing book, fun to read, with lots of photos of animals at work against pests. Nic Gill should be commended for writing something for children that by focusing on beagles and other pets, raises awareness about biosecurity in an enjoyable way.

I can hardly believe it, but in the first chapter the word ‘biosecurity’ appears 14 times. CSIRO publishing, which published the book, has these promotional words on its website:

“Meet the super dogs, hero rats and cyborg bees keeping our environment safe.
“Come on an action-packed adventure with an amazing mob of animal eco-warriors as they use their special talents to help solve our planet’s environmental problems!”

Here is an extract, about sniffer dogs at Hobart Airport: 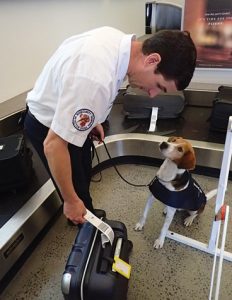 The next bag that Lockie pulls up, which belongs to an international traveller, does have an apple in it, and Lockie is rewarded. Although Lockie and the other dogs will find at least a dozen banned items while I’m watching, Rhonda doesn’t think that most people are deliberately trying to do the wrong thing. ‘Usually, it’s people who don’t understand our language, who aren’t familiar with our request, or people who just forget.’

Unfortunately, the team does sometimes come across people who are deliberately bringing into Tasmania, or trying to smuggle out, things that they shouldn’t. Professional smugglers sometimes traffic, or try to bring in or smuggle out, more than one type of item at a time. Once, the dogs stopped a known smuggler with live parrots wrapped up in sleeping bags, as well as bird eggs and grapevines, all in one shipment. Plants that haven’t been treated to kill diseases can bring those diseases into the state, which could kill native plants and crops, and illegally trafficked animals can bring in diseases, or turn into pests themselves.