You are here: Home > Feral cats: scourge or citizen?

In July the Australian government declared war on feral cats, announcing plans to cull 2 million over the next five years. Photo: topysnette

The national Threatened Species Summit held in June brought welcome attention to the plight of threatened mammals, birds and plants. Top of the hit list were feral cats, with environment minister Greg Hunt proposing to cull two million of them by 2020.

We welcomed the fast-tracked release of the 2020 Threatened Species Strategy and the updated Feral Cat Threat Abatement Plan along with $6.5 million for specific recovery programs. It is a start towards the goal of reversing the downward trajectory of our most endangered species.

The two million cat target stood out uncomfortably against the rest of the scientifically credible plans. It was not mentioned in the official cat threat plan. Instead the plan sensibly promotes ‘impact abatement’ prioritised for important mammal populations most at threat from feral cats. Even if it was dreamed up merely as a political target to demonstrate the magnitude of the task, scarce resources must not be squandered to meet a meaningless count of cat carcasses.

Biologists Arian Wallach and Daniel Ramp criticised the two million target for totally different reasons. In their article in The Conversation they suggested we ‘embrace cats as part of Australia’s environment’, and accept them as ‘Australian citizens’. Stopping the killing of cats would allow the ‘rest of the Earth’s species to flourish … embracing the entirety of Australia’s modern ecosystems – native and feral’. Wallach later told an ABC radio national audience she would be thrilled if deer too were allowed to spread across Australia.

Of many critical responses to the story, it is worth quoting Stewart Nicol of the School of Biological Sciences at University of Tasmania:

The ethical basis of the argument seems to be that we should not cause suffering to cats, or kill them. Clearly, avoiding inflicting suffering on animals is an important ethical principle. But how do we balance that against our ethical obligation to stop extinction of species? How about our ethical obligation to prevent destruction of ecosystems? Most biologists would argue that these two far outweigh any ethical problems associated with the humane culling of cats.

There is…a large and growing body of high quality, peer reviewed research that shows the beneficial effects of excluding cats and local cat culling. There are some traces of fact in the article, quickly followed by egregiously foolish claims. Cats are able to hunt more efficiently where cover is reduced, but the answer is better fire and stock management. Removal of foxes can benefit cats, but the answer is to reduce numbers of both. Ecological restoration can help reduce the effects of cats on wildlife, and removing cats is an important step in ecological restoration.

This article is built around a ludicrous metaphor – if we grant cats Australian “citizenship” they will become happy, lovable, law-abiding members of the wildlife community. They won’t. If we do nothing about cats they may be happy, but we get species extinctions and significant knock-on effects on entire ecosystems.

We could just dismiss the claims by Wallach and Ramp as unworthy of debate but they are likely to appeal to many people who feel a strong attachment to cats and other living things, so we must carefully explain the faults in their arguments.

For this reason we must take very seriously animal welfare concerns but clearly present the stark, uncomfortable consequences – for biodiversity and animal welfare – of failing to control cats and other destructive invasive species. 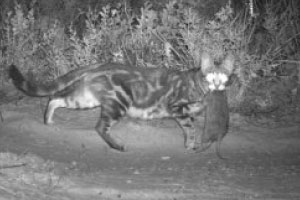