You are here: Home > After the fires: Ferals and weeds among nature’s biggest threats

The smoke may be settling, but the battle to save our native wildlife following the devastation of the summer fires is far from over. Predation and competition from feral pests and invasion by weeds now pose the biggest threat to our struggling wildlife.

Following a chorus led by the Invasive Species Council and conservationists this message is now being embraced by political leaders at state and federal levels.

“The number one thing that you need to do for all species that need protection is predator control. So out on the prowl foxes, cats and hard-footed animals like deer, will push our vulnerable native species away from food, away from unburnt areas.”

The road to wildlife recovery requires long-term, ongoing investments in invasive species control. Federal and state government have taken the first steps to embrace this challenge, but there is more work to be done.

$50 million is a good start

In January we welcomed the federal government’s announcement of an initial $50 million investment towards emergency wildlife and habitat recovery efforts.

Half of that is being spent at a local level and is reaching the ground through natural resource management groups, wildlife rescue groups, Greening Australia, Conservation Volunteers Australia and zoos.

The other half is being directed towards emergency intervention at a federal level by Threatened Species Commissioner Dr Sally Box, advised by a specially convened expert panel for wildlife and threatened species bushfire recovery.

Early efforts by the federal government have included gathering information to understand which species have been left most vulnerable by the fires. This led to the release of a provisional list of 113 animal species that have been identified as the highest priorities for urgent management intervention. Many of these animals have had 30 per cent or more of their known range burnt.

The Invasive Species Council has analysed the list and found that of the 113 species, 36 were nationally listed threatened species where invasive species were known to be a major threat.

On the list are ground-dwelling species such as ground parrots, dunnarts and skinks, which will be most vulnerable to predation by feral cats and foxes.

Many of the identified listed species also exist in environments that continue to be degraded by feral herbivores. The broad-toothed rat, smoky mouse, alpine she-oak skink and northern and southern corroboree frogs exist in fragile alpine environments that will struggle to recover under the hard hooves of feral horses and deer. Until recently, feral horses have been excluded from emergency feral animal control.

The responsibility for pest management (and subsequent recovery of our native wildlife) falls under state and territory legislation.

In late January NSW environment minister Matt Kean announced plans for what has been called the biggest feral animal cull the state has ever seen. This was followed by the release of the NSW Government’s immediate response plan for Wildlife and Conservation Bushfire Recovery.

In the same spirit, the Victorian government has set aside $17.5 million as part of its rescue package for wildlife and biodiversity. Aerial shooting of deer, feral pigs and goats has commenced across the state’s high country.

The response plans of the NSW and Victorian governments are an important building block for ongoing feral animal management in the post-fire landscape. For wildlife recovery efforts to be effective, subsequent control methods must address all feral animals. The original plans failed to deal with the extensive environmental damage that the largest hooved pest animal, feral horses, are causing throughout national parks.

In the past week there has been a welcome shift. Matt Kean announced emergency feral horse control for three areas in Kosciuszko National Park while Parks Victoria adopted a new strategic plan for Barmah National Park and Barmah Forest that supports the removal of all but 100 feral horses over four years, then ultimately full removal.

While this is a step in the right direction, post-fire feral horse control needs to be adopted across all of the state’s national parks, including fire-ravaged Guy Fawkes River and Oxley Wild Rivers as well as Barrington Tops.

The initial $50 million investment towards wildlife recovery was drawn from a much larger pool of cash – the Federal Government has made available $2 billion towards a national bushfire recovery fund, with the majority of this funding still unallocated.

Substantial subsequent investments in our wildlife are of necessity. Surviving populations will be quite small and could take years to recover, if at all.

Hundreds of millions of dollars will need to hit the ground over the coming months, even years, to make sure pests and weeds don’t prevail over the native wildlife that’s really struggling.

Funding needs to reach all land tenures and deal with all pests and weeds, especially those new to an area. As a priority, funding needs to flow to those parts of the national parks system and private conservation estates that are critical havens for threatened plants and animals.

Now is the time to put into place national and state five-year pest and weed plans that capitalise on the opportunity of the massive bushfires and strategically push back against the relentless pressure from feral cats, foxes, deer, horses, goats, pigs and a multitude of weeds.

One Response to “After the fires: Ferals and weeds among nature’s biggest threats” 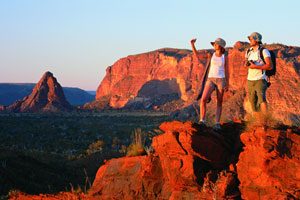