A three-year biological control program for wandering trad is close to collapse one-year in, thanks to uncertain funding.

The biological control program for the weed, wandering trad (Tradescantia fluminensis), began after years of pressure was applied by a consortium of 14 volunteer groups battling weeds in the Dandenong Ranges east of Melbourne.

Wandering trad forms thick mats along stream banks that suppress all other plants. In the Dandenongs an estimated 50km of streams are have been infested. Herbicides are not suitable near streams because of their impact on invertebrates and animals such as platypus that feed on the weed. Hand control of large areas is impractical and access to private land hard to achieve. Wandering trad is an ideal candidate for biological control.

Two years ago, New Zealand released two beetles from Brazil following an eight-year trial. Further testing would be needed for Australia, but much of the initial work in identifying suitable pests, their breeding and release had been done. Investigation of a fungus for release in New Zealand is also showing promising signs.

A sponsoring state had to be found prior to importing potential control agents into Australia. Victoria could not make an application because wandering trad is not listed as a declared weed, so Victorians made an approach to NSW, where it is listed. 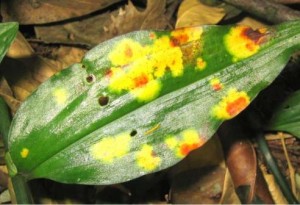 The fungus, Kordyana sp, (Brazilian yellow leaf spot fungus) attacks the leaves of wandering trad. The spores are spread by wind, much more quickly than the insect. 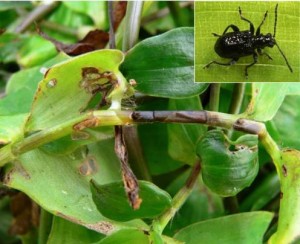 The insect, Lema basicostata, attacks the stem of wandering trad as shown here and greatly reduces the biomass of the plant. It has already been released in New Zealand where it is successfully attacking trad in the wild.

The approvals were secured and last year one of the New Zealand beetles, Lema basicostata, was imported into a secure research facility in Victoria and bred successfully. The beetle attacks the weed’s stem and is in the process of being tested on Australian flora – the results are promising.  A fungus, Kordyana sp, has also been imported and is being tested by CSIRO, with similar promising results.

Extraordinarily, funding was only approved for the first year of the three-year testing program. Funding will run out by June this year. 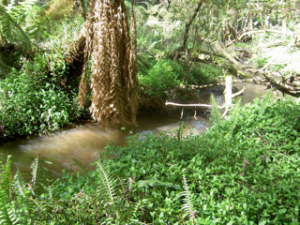 Meanwhile community groups give up countless volunteer hours trying to remove wandering trad from large areas of NSW and parts of Victoria, mostly by hand. Agencies and local governments spend large amounts of money trying to control trad. The Federal Government recently allocated $450,000 for control of Trad in the Dandenongs pending the successful testing of biocontrols.

Biological control agents would save millions of dollars in voluntary and paid effort each year. It would cost less than one million dollars to finish the program.

We praise the efforts of Bill Incoll, President of Monbulk Landcare Group, who is leading community efforts to introduce a biological control solution to help tackle local weed problems.