You are here: Home > Lambie’s bumblebee deal carries feral sting in its tail

Bumblebees have been viewed as an invasive species wherever they have been introduced. Photo by J.Ingles-Le Nobel, Flickr – Creative Commons license bit.ly/1LxUnSD

A deal struck by Tasmanian Senator Jacqui Lambie intended to allow the commercial use of feral bumblebees in Tasmania could open the door to other harmful invasive species being illegally introduced into Australia. It would, for example, create an incentive to illegally introduce bumblebees to the mainland.

Bumblebees are recognised as a serious threat to native species – they compete with native bees and birds, spread weeds, may spread parasites and pathogens, and are less effective pollinators of some plants. Applications to import bumblebees to the mainland have twice been rejected because of the environmental and agricultural risks.

Currently, it is illegal to possess non-native species that have arrived in Australia accidentally or illegally. This is to avoid creating an incentive for people to illegally import exotic species.

But a bill before the Senate – the Environment Protection and Biodiversity Conservation Amendment (Bilateral Agreement Implementation) Bill 2014 – will reverse that by opening up the potential for legal possession and use of some invasive animals established in Australia that have not been approved for import.

Amending our environment laws in this way would raise expectations that illegally introducing an invasive species into Australia would eventually lead to its legalisation. Various safeguards have been written into the bill but may not be enough to dampen such expectations and prevent smuggling.

Ever since bumblebees were illegally or accidentally introduced into Tasmania in 1992, some tomato growers have been pushing for them to be introduced to the mainland to pollinate greenhouse tomatoes.

The most recent push, an application by the Australian Hydroponic and Greenhouse Association to add bumblebees to the list of legal imports, was rejected in 2008 because of the environmental harm they are likely to cause.

Allowing commercial use of bumblebees in Tasmania would create a dangerous precedent. Maintaining the current total ban on possessing illegally introduced species is the best way to minimise the risk of bumblebees being smuggled to the mainland.

So far, the bill has not gained the support of enough cross-benchers to pass and has been adjourned. We will ask for your help in lobbying cross-benchers if it returns.

For more information about bumblebees and the risks of allowing commercial use in Tasmania, download our fact sheet below. 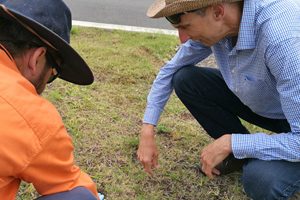