You are here: Home > Does the end of the Game Council deal with hunters’ failed feral animal control?

The abolition of the NSW Game Council from July 2013 was a watershed in the way the NSW Government deals with recreational hunting. But is the job finished?

Up until that point, governments led by Labor and then the Liberal/Nationals coalition had kowtowed to the demands of the Shooters Party and progressively expanded hunting on public lands.

The original premise when the NSW Game Council was set up in 2002 was that it would be a self-funded body for managing hunting on public lands.  Last minute changes saw national parks and native birds excluded, and the legislation renamed from the Game Act to the Game and Feral Animal Control Act. Despite the name change, the control and eradication of feral animals has never been part of the NSW Game Council’s statutory objectives nor obvious in their mode of operation.

The Invasive Species Council has been highly critical of false claims for the effectiveness of the Game Council’s hunting program  for feral animal control.  The results have not justified it being labelled ‘conservation hunting’.

More controversially, changes to the Game Council’s legislation in 2012 saw hunting expanded to national parks and ten native duck species and several native quail and pigeon species added to the game list. Government continued to subsidise about 70% of the operations with $2.6M allocated in 2011-12.

The Game Council came unstuck with these latest changes. There was intense and sustained pressure from conservation groups, national parks staff and the public. The government could not ignore the weekly media stories of hunting embarrassments and the regular local protest rallies. Predominantly the concern was about visitor safety in national parks, but there was also critique that hunting would not assist feral animal control and would divert resources from parks control programs. These concerns built on the disquiet after hunting was first introduced into state forests in 2003.

The independent review of the governance of the NSW Game Council led to the Council’s abolition, the suspension of all hunting on public lands (State Forests and a handful of Crown lands), and the transfer of Game Council functions to the Department of Primary Industries. The recreational hunting program planned for national parks will now be a properly integrated pest control program run by the park managers. Volunteer shooters will be closely supervised by park staff in a trial in 12 national parks, and they will be required to undergo the same training and skills tests as park rangers.

For the national park program, gone is the dispersed ad-hoc hunting, the use of vintage buck shot guns, bows and arrows and dogs. Shooters must be at least 18 years old rather than the proposed 12 year minimum. As the NSW Government claims, the new national park program will be the most stringent volunteer shooting program in Australia, exceeding the standards of the well-regarded volunteer shooting programs in South Australia and Queensland.

The scathing governance report by former senior public servant Steve Dunn found that the NSW Game Council had ‘unacceptable’ governance deficiencies (in areas such as compliance, safety, licensing, lack of strategies and accountability) and an ‘inherent conflict of interest associated with its functions to both represent the interests of hunters, and to regulate their activities’ (Dunn 2013, page 3).

There is little mention in the report of the effectiveness of the Game Council in feral animal control. This is in part due to the terms of reference of the review being constrained by the Council’s objectives, which don’t include feral animal control. There are only two references to this issue. The review says ‘some’ experts don’t agree with the claim that removing any feral animal is beneficial while others suggest it is misleading to claim the success the Game Council does (Dunn 2013, page 13). The review blames the Game Council’s lack of research into the effects of hunting efforts to excuse its reliance on feral animal kills as the sole measure of performance, noting ‘this assumption is not universally agreed to be the case’ (Dunn 2013, page 44)

This is a major failing of the review and understates the issue. No pest control expert disagrees that hunters play only a limited and sometimes a counter-productive role in feral animal control. Except in small accessible areas or where they supplement other methods, recreational hunters are generally not able to apply sufficient pressure to exceed the rate of increase and immigration of feral animals. None of the 55 Dunn recommendations addresses the issue of hunter effectiveness and the review concludes that ‘orderly hunting of game and pest animals is a worthy goal’ that government should oversee (Dunn 2013, page 5).

What is needed now is for the government to heed the advice of their own pest experts and be upfront about the role hunting plays in feral animal control. Government must end support for recreational hunting and stop investing its scarce funds in an activity that is largely a sport and instead support genuine pest control programs.

So, in summary, the government has ruled that there will be no recreational hunting allowed in national parks and instead a legitimate and carefully run feral animal control program that uses skilled volunteer shooters, under the direction of park staff. In state forests and other public lands, hunting is suspended while a safety review is undertaken. There will be no review of the effectiveness of hunting in feral animal control.

Other aspects of the hunting regime still persist and we await news about their future. A major problem with the Game and Feral Animal Control Act that may continue is the Act’s designation of deer as ‘game’ rather than a ‘pest’ animal, preventing its effective control, as well as allowing recreational hunting of a dozen native birds and a handful of exotic ‘game’ birds (potentially assisting their spread).

To abolish the Game Council will require legislation to be passed by Parliament. To do this, the government will need the support of either Labor, The Greens or the combined forces of the Shooters and Fishers Party and the Christian Democrats. It would be surprising if the Shooters and Fishers Party would support the abolition of its own love child. The alternative could see Labor or the Greens seeking more fundamental changes that deal thoroughly with the safety risks of hunters and to ensure the Game Council’s bogus ‘conservation hunting’ program is replaced with a conservation-focused program that assists legitimate feral animal control program, both within national parks and across all other land tenures.

If the work of the Game Council is merely absorbed into the government to address the issues raised by the Dunn report, recreational hunters are likely to remain a powerful influence over feral animal policies, promoting ‘sustainable harvesting’ of deer and other feral animals rather than their control and eradication. The administration of hunting may continue to receiving government funding. Staff moved from the abolished Game Council to supervise hunting within government may again dress up hunting as conservation.

There has been no word on how all the funds ($19.1m) earmarked in May 2012 for the Game Council’s supervision of the now abandoned national parks hunting program are to be spent. These should now be directed into high priority feral animal control programs, not a hunting program.

The initial signs about the future direction of pest control from the NSW Government are extremely promising. When the Minister for Agriculture, Katrina Hodgkinson, announced the abolition of the Game Council on 4 July, she flagged better coordination of government agencies in pest animal control, an emphasis on a cross-tenure approach and a model of pest control based on the successful coordination of bushfire management in NSW.

The formation of Local Land Services at the start of 2014 will combine the work of the Department of Primary Industries, catchment management authorities and the livestock health and pest authorities, providing impetus for improved control programs for feral animals and weeds that threaten the environment and agriculture. Changes have been flagged to the state’s invasive species laws and we can expect this to facilitate a more preventative and risk-based approach.

The decision to abolish the NSW Game Council and halt the use of hunters for feral animal control was the end of a painful and misguided experiment by both the state Labor and O’Farrell governments. The stage is now set for NSW to be a leader in invasive species management rather than an embarrassment.

19 Responses to “Does the end of the Game Council deal with hunters’ failed feral animal control?” 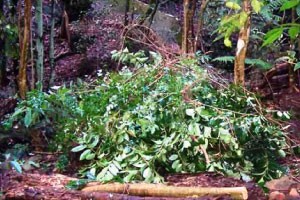