You are here: Home > Australia must stop red fire ants in their tracks

Backed by strong community support we worked long and hard to help persuade Australia’s politicians of the need to fully fund the country’s red fire ant eradication program, and in 2017 that hard work paid off when state and federal agriculture ministers approved a ten-year, $411 million plan to eradicate red fire ants from southeast Queensland.

If the funding had fallen through Australia would now be facing a national fire ant emergency.

These highly invasive ants first turned up in Australia at the northern port of Brisbane in 2001. We know of four other incursions. One large outbreak in southeast Queensland remains active, but contained.

We just have to look at the US to see what would happen to Australia if we fail to eradicate fire ants.

Fire ants were accidentally introduced into Alabama in the 1930s. It was not until 1957 that eradication was attempted but it was too late. They have now spread to Texas, Arkansas, California, Florida, Georgia, Louisiana, Mississippi, New Mexico, North Carolina, Oklahoma, Puerto Rico, South Carolina, Tennessee, Texas, and Virginia.

Could this happen in Australia?

Yes. Nearly all of Australia is vulnerable to fire ant invasion, including all major cities and towns. More than 99% of the mainland and 80% of Tasmania are suitable to these deadly intruders.

Fire ants might be small, but when their nests are disturbed they rise up in their thousands to swarm and sting their intruder en masse.

Without the regular use of chemical baits, infested parks, gardens and homes become uninhabitable. In the US, 30% to 60% of people in infested areas are stung each year. The stings are painful, hence their name ‘fire’ ants. The alkaloid venom causes pustules and, in some people, allergic reactions.

Fire ants have greater ecological impacts than most ants because they reach extremely high densities. An assessment of their likely impact on 123 animals in southeast Queensland predicted population declines in about 45% of birds, 38% of mammals, 69% of reptiles and 95% of frogs.

These ants damage crops, rob beehives and kill newborn livestock. During dry times they dominate the margins of dams and livestock cannot reach water without being seriously stung.

Australia has too much to lose if we don’t eradicate red fire ants.

Why we need to take action

Experts say it would cost $38 million a year spent over the next decade to eradicate fire ants from South East Queensland. The alternative is unthinkable. If fire ants get out of control Queensland alone faces a 30-year damage bill of $45 billion, dwarfing the cost of eradication.

On 26 July 2017, federal, state and territory governments took action and properly funded the fire ant eradication program. If the eradication program had remained poorly funded, as it had been for the past 16 years, millions of Australians would have been staring down the barrel of a painful future learning to live with fire ants. 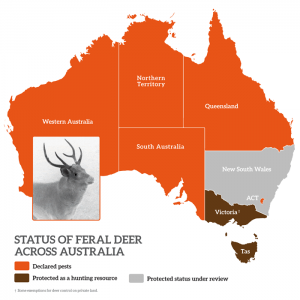