In April 2010 a new pathogen that could fundamentally alter Australia’s ecology was detected in NSW.

The pathogen, myrtle rust, had slipped through national biosecurity borders and has since spread to far north Queensland and Victoria. Climatic modelling suggests it will spread much further.

There are more than 2000 plants in family Myrtaceae, Australia’s dominant plant family, including eucalypts, bottlebrushes and tea trees – most are susceptible to the disease.

Myrtle rust could alter the composition and function of forest, woodland, heath and wetland ecosystems. This incursion is about as bad as it can get for biosecurity in Australia – a new disease attacking our dominant plants, including species already on threatened lists.

What is myrtle rust?

Myrtle rust (Puccinia psidii) is a fungus that causes disease in plants in family Myrtaceae. It is one of a complex of fungal pathogens known as eucalyptus or guava rusts.

Australian scientists have been greatly alarmed by these rusts since they were first reported causing serious disease in eucalypt plantations overseas.

Early on, it was recognised that the list of Australian plant species that might fall prey to these pathogens could be very long and have potentially dire results for our ecosystems. 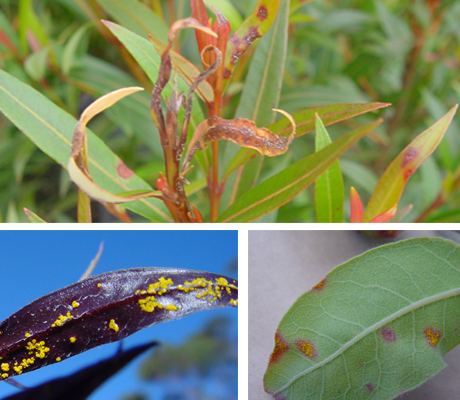 It is not possible to accurately predict the ecological impacts of myrtle rust in Australia but Geoff Pegg, plant pathologist with Biosecurity Queensland called it “…(t)he pinnacle of pathogens we wanted to keep out of Australia.”

That eucalyptus rust has caused severe damage to plants elsewhere, and that Myrtaceae plants dominate many Australian ecosystems and are naïve to the pathogen, suggest the impacts could be severe and change over time as the rust adapts to Australian conditions.

There are no control options (fungicides) in bushland.

NSW has already made a preliminary determination to list myrtle and eucalyptus rusts as key threatening processes. They note that the area of highest risk in NSW – the coastal zone from Illawarra to the Queensland border – includes a large proportion of the state’s conservation reserve system, many Myrtaceae-dominated ecological communities, and most of NSW’s World Heritage-listed rainforest.

How was Australia caught off-guard

Contingency plans against the possible incursion of these rusts were drawn up by government and industry.

The Invasive Species Council highlighted the dangers in our submission to the government’s review of biosecurity arrangements in 2008:

Australia is at grave risk of importing Eucalyptus rust (also known as guava rust) from South America, where it is an endemic pathogen of Myrtaceae plants and infects eucalypt plantations. Its arrival in Australia would likely be devastating in its consequences for woodlands and forests. But as yet there is no strategy in place to prevent its incursion – a strategy that would prioritise working with countries of origin to prevent its export.”

Despite government recognition of the high threat level, Australia was poorly prepared for an incursion.

How did Australia respond to the incursion?

In April 2010, the rust was discovered at a commercial property in NSW.

Inexplicably, after just one week of searching and finding the rust in only one other nearby facility and none in surrounding bushland, the national response was stood down by a federal committee, to the consternation of scientists, conservationists and affected industry sectors.

A letter sent to federal environment minister Tony Burke by the Institute of Foresters of Australia clearly expresses this concern, warning that myrtle rust is a ‘major bio-security incursion and the consequences to our native flora and plant industries are unknown but potentially enormous’.

This concern resulted in the reinstatement of the national shared-cost response in June 2010. Finally, in December, after the disease was found in bushland at multiple sites, the rust was again deemed ineradicable.

Would Australia have been able to detect and eradicate myrtle rust if it had been better prepared and the contingency plan was immediately implemented?

That the rust may have been in Australia up to two years before it was detected suggests that eradication opportunities were lost because of a lack of surveillance. The failure to immediately dedicate national resources to eradicate the disease may cost our environment and industries that use Myrtaceae dearly.

What did we learn?

In May 2011 the Invasive Species Council proposed a Senate inquiry into the myrtle rust response so that policies and procedures can be improved by learning from its successes and failures. In 2014, the Senate held a broad-ranging inquiry to look at the failures in quarantine since 2000, including the incursion of myrtle rust in 2010. The Invasive Species Council prepared a detailed myrtle rust case study as part of its submission to the Senate inquiry.

The final report of the Senate inquiry documented deficiencies with the response to myrtle rust to highlight weaknesses in Australia’s preparedness for environmental invasive species.

Myrtle rust continues to spread across Australia. By late 2015 is was widespread in Queensland, NSW and Victoria. It has reached Tasmania where it was detected in garden plants in the NE in February 2015 and  Northern Territory where it was detected on Melville Island in May 2015, The Tasmanian government is seeking to contain and eradicate myrtle rust from the state while the Northern Territory government has determined it is not possible to contain or eradicate the pathogen.

What should be done now

Aim to keep further strains out of Australia

High priority should be given to keeping further biotypes of eucalyptus or myrtle rust out of Australia; new strains could considerably exacerbate the disease and the number of species affected.

Ensure that environment NGOs are accorded equality with industry groups in all government processes to respond to the disease and biosecurity arrangements. Environmental agencies should be involved in all relevant government decision making. Develop cost-sharing arrangements for priority actions in the national interest: Develop a national response to myrtle rust that involves cost-sharing for high-priority actions that are primarily in the public interest.

The story of myrtle rust incursion is perhaps indicative of a biosecurity system that cannot adequately protect our environment.

Community participation in policy and decision-making around environmental threat should be a routine part of our national biosecurity architecture.

We have taken up these issues with government and we hope proposed improvements will be implemented. 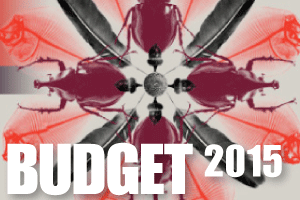