Global leaders in insect invasion biology are in Melbourne this week to war game Australia’s next alien insect invaders.

They will spend four days mapping out where future insect invasions could come from, and take part in a special Q&A Debate on Tuesday night 20 March at Monash University’s Clayton campus called Ants, Bugs & Biters.

Update: view the video of the Q&A debate >>

“The project led by Monash University’s Professor Melodie McGeoch has brought together some of the world’s leading thinkers to work out how to stop these harmful insect pests,” Invasive Species Council CEO Andrew Cox said today.

“Our hive mind includes Dr Andrew Liebhold from the US, who is part of the battle against an onslaught of invasions in North America by damaging forest pest species such as Dutch elm disease.

This year she was made an MBE for her outstanding service to biodiversity research, citizen science and science communication, including her work on the UK Ladybird Survey.

“This expert gathering will be a key step in delivering a comprehensive new approach to Australia’s pre-border biosecurity risk assessment and prioritisation,” said Professor Melodie McGeoch.

Australia has suffered many of its own dangerous insect invasions in recent years, including yellow crazy ants and red fire ants.

On Christmas Island yellow crazy ants have killed tens of millions of ecologically important red crabs and robber crabs, and invaded more than a quarter of the island’s rainforest before a baiting program was instigated.

In Queensland red fire ants are now the subject of a 10-year, $411 million battle plan to rid the country of the dangerous menace.

The Q&A Debate will be moderated by Associate Professor Andrew Robinson from the University of Melbourne’s Centre of Excellence for Biosecurity Risk Analysis.

Update: view the video of the Q&A debate >>

“We don’t know when the next dangerous new invasive insect will land in Australia, or where it will come from, but we do know that unless Australia fixes its leaky environmental borders we will be invaded again and again and again,” said Mr Cox.

Federal and state agricultural ministers meet at the end of April to consider major reforms to Australia’s national biosecurity system. The Invasive Species Council is calling on them to:

The gathering is part of a joint project of the Invasive Species Council and Monash University’s School of Biological Sciences, led by the McGeoch Research Group.

Support is provided by the Ian Potter Foundation and the Department of Agriculture and Water Resources. 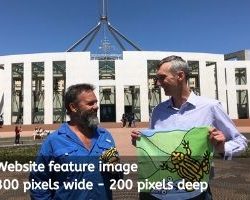