You are here: Home > Risks and pathways project 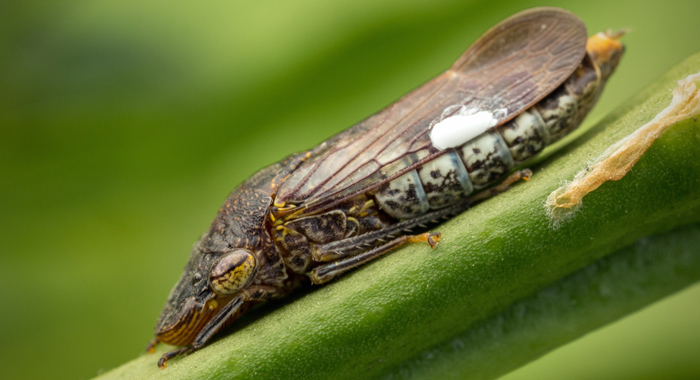 The glassy-winged sharpshooter is a vector for the serious plant pathogen Xylella fastidiosa, which infects native plants and kills some tree crops. In high densities the sharpshooter can weaken plants. It appears to be toxic to spiders. They have piercing, sucking mouthparts and rows of fine spines on their hind legs.
Photo: Alex Wild

Our Invasive Insects Risks and Pathways Project set out to identify insect species from other countries that, if they ever reach Australia, have the potential to cause great harm to our natural environment.

In January 2017 we joined forces with the McGeoch Research Group of Monash University, with support from the Ian Potter Foundation, to begin this project.

The aim was to identify potential insect invaders that could harm Australia’s natural environment, and their likely impacts and pathways of arrival. We also wanted to establish a best-practice process for identifying environmental biosecurity priorities for all species groups.

It was the first stage of a larger project that seeks to comprehensively identify the likely pathways of arrival and impacts of every type of invasive species – plants, animals and diseases – that could harm Australia’s natural environment. This information would greatly strengthen Australia’s biosecurity system by reducing the chance of these species arriving and establishing.

The Invasive Insects Risks and Pathways Project finished in early 2020 and funding is now being sought for the next stage to look at invasive plant and animal pathogens.

Insects are the world’s most diverse class of animals and their abundance and diversity, as well as their small size, rapid reproduction and multiple life stages make them a very challenging group of animals for biosecurity authorities.

Given the difficulties and costliness of eradicating or controlling invasive insects, one over-riding priority for Australian biosecurity must be to prevent more harmful species arriving and establishing. To do this, biosecurity authorities need to know which insects overseas represent the greatest invasive risks for Australia and how they are likely to arrive here.

Much of this work has been done for pests and diseases harmful to human health and agriculture. At the time this project began, only a few of the most obvious risks to the environment had been identified. Addressing this deficiency was highlighted in findings of the 2015 Senate inquiry into environmental biosecurity and the 2017 independent review of national biosecurity.

The Invasive Insects Risks and Pathways Project represents a major community contribution to national biosecurity, led by a not-for-profit environmental organisation, run by a leading university researcher, funded primarily by private philanthropy and conducted in collaboration with Australian and international researchers.

The Invasive Insects Risks and Pathways Project is the first systematic, comprehensive assessment of insects that cause environmental harm globally and the pathways by which they are transported.

It is also the first dedicated, comprehensive assessment of the mechanisms by which invasive alien insects impact the environment and the first use of horizon scans for elucidating the likely impacts of certain species in Australia should they invade.

Internationally, the project makes a contribution by testing on insects the application of the Environmental Impact Classification for Alien Taxa scheme – a standard protocol being developed by the International Union for the Conservation of Nature. 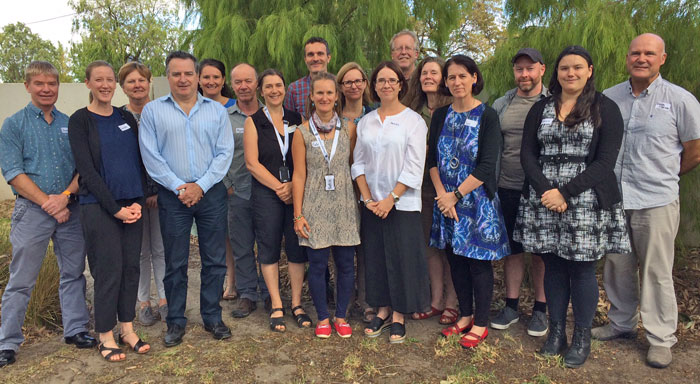 Australian and international scientists who attended a week-long impacts assessment workshop in March 2018 as part of the Invasive Insects Risks and Pathways Project.

The first step was to synthesise the scientific knowledge of invasive insect species causing environmental harm anywhere in the world. Evidence of harm elsewhere is the most reliable way to predict potential invasive species. A comprehensive information platform was designed and populated, recording all scientific evidence of harm recorded in international literature and on databases.

For each of the invasive insects for which there is sufficient evidence in the scientific literature of their environmental impacts, we described and rated the severity of these impacts based on a scheme developed by the International Union for Conservation of Nature (IUCN) – the Environmental Impact Classification of Alien Taxa (EICAT) – and identified the pathways by which they have spread. This detailed literature review and assessment work was done by a dozen insect and biosecurity risk experts from Monash University and other national and international research institutions.

The results will be published as peer-reviewed scientific papers and in an open source information platform that enables updates as more information becomes available.

Of the world’s estimated 4 to 6 million insect species – of which only 1 million have been described – we found reports of more than 2800 having some sort of an environmental impact outside their native range. There is evidence of adverse environmental impacts for more than 500 species, and sufficient evidence from multiple sources for about half of these (247 species) to allocate them to a priority assessment pool.

About 100 of the priority species were assessed for their global impacts by the EICAT method. Assessment of the remainder will take place during 2020. 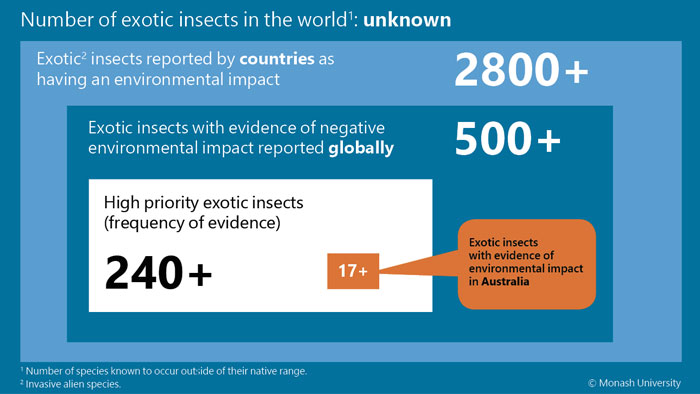 The process for refining the global species pool of invasive insect species.

Of those assessed so far, about three-quarters have had concerning impacts on biodiversity somewhere in the world:

The most common mechanisms by which they cause harm to other species are competition, herbivory, predation and transmission of disease.

A very few insect groups dominate the assessment pool of 247 harmful invaders. Of the world’s 24 orders of insects, only 10 are represented in this pool and just six are represented by more than one species.

By far the most dominant group and therefore the world’s most environmentally harmful invasive insect species is the order Hymenoptera – the ants, bees and wasps – accounting for half of the pool species. These social Hymenoptera also account for 16 of the 17 insect invaders already in Australia and known to be causing environmental harm.

Most of these invasive hymenopteran species are sociable, living in colonies, and their sociality – often extreme in invasive ants – helps explain their invasion success and the immense harm they cause. 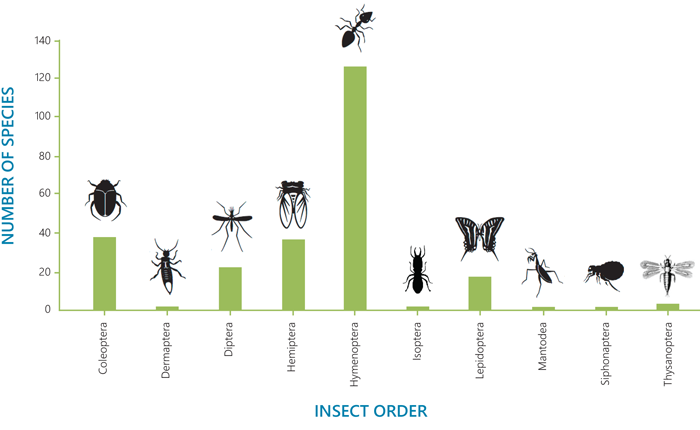 In this age of globalisation, with more than 50,000 merchant ships plying the seas carrying some 10 billion tonnes of goods a year, there are many ways for insects to travel to new countries.

In this project we recorded all the pathways by which the assessment pool of 247 insects have spread around the world, using a scheme adopted by the Convention on Biological Diversity that encompasses 44 different pathways.

Most (85%) of the harmful insect invaders for which there is information about pathways have been introduced unintentionally. This is the opposite of the situation for invasive plants and vertebrate animals, most of which have been spread intentionally.

Our assessment found that 10 unintentional pathways are commonly used by invasive insects.

The top three pathways are:

The ants, wasps and bees (Hymenoptera), and beetles (Coleoptora), use all of the most prevalent pathways, indicating that their flexible travel habits are a major reason for their high level of invasiveness. 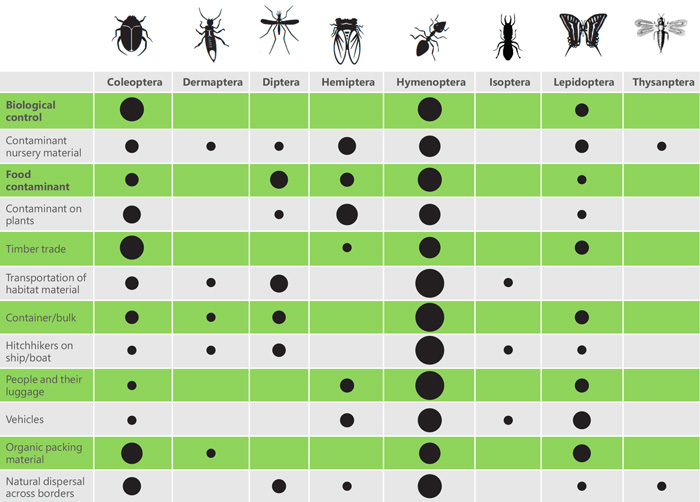 The use of introduction pathways by invasive insects. Only the most prevalent pathways and insect orders are shown. Circles and their sizes represent the relative contribution (%) of each insect order to the number of species using a particular pathway. For example, an insect on the food contaminant pathway is more likely to be a Hymenopteran than a Dipteran. Circle sizes (from smallest to largest) represent 1–10%, 11–20%, and so on up to 60%. Note that the figure does not provide information on the relative importance of pathways per se.

The next steps for the project are to complete all EICAT assessments and to assess the potential ecological consequences for Australia of certain priority invasive insects.

The Invasive Species Council will work with Australia’s biosecurity agencies and other stakeholders to:

a. assess the potential ecological consequences for Australia of certain priority invasive insects;

b. incorporate the results of the project into Australia’s biosecurity system, including surveillance, contingency planning, quarantine measures and eradication responses;

c. apply the process to other species groups and

d. establish a sustainable and publicly accessible data platform to maintain and regularly update information on potential invasive risks for the Australian environment.

The project has made 23 recommendations and can be viewed in the full project report. In summary, these fall into three areas:

a. Priority species: Invasive insect species of environmental concern not already in Australia should be incorporated into Australia’s biosecurity system.

b. Introduction pathways: There should be a strong focus on reducing the risks of insect spread via the 10 most prevalent pathways for unintentional introductions.

c. Social Hymenoptera: Hymenopteran introductions should be a top priority for biosecurity, with the national invasive ant biosecurity plan fully implemented and improved preparedness to respond to new incursions.

A similar process should be applied to other species groups as the basis for determining priorities for Australian environmental biosecurity.

3. Sustaining the process with an accessible data platform

A national public exotic and invasive species data platform is needed that is comprehensive, updateable and well resourced.

The results of the project will be peer-reviewed and made available as an open access resource for the Australian and international communities. This will include a database of the more than 2000 species considered and species-by-pathways data and information on the Environmental Impact Classification for Alien Taxa process and its application to insects, a list of 100 species ranked by their impact severity, pathway results and structured horizon scan.

Links will be added to this page as scientific papers are published.

This project was funded primarily by The Ian Potter Foundation, with supplementary funding from the Australian Department of Agriculture and the Queensland Department of Environment and Science.

The research was conducted by the McGeoch Research Group of Monash University, led by Professor Melodie McGeoch, with contributions from:

The research benefited from the advice of a reference panel:

The recommendations were developed with the benefit of advice from 20 biosecurity experts from government, research and industry institutes who attended a workshop for this purpose.

Further project contributions will allow us to apply the project to other taxa such as plant and animal pathogens. Please contact us if you are interested in assisting. 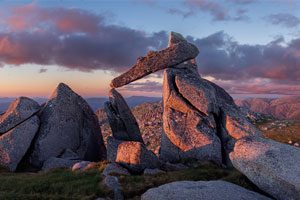