You are here: Home > Case studies

The case studies are made up of our ‘dirty dozen’, 12 dangerous invasive species that have made it past Australia’s border controls since 2000. Our invasion timeline shows when these and other invaders were first found in Australia. The case studies also include two more invaders while they have not yet made it into Australia, are of great concern – the green iguana and pathogens of eucalypts and wattles.

They were compiled using publicly available information at the time of the last update in December 2017. We would welcome new information or updates to biosecurity response for inclusion in future updates.

Environmental impacts: The Asian black-spined toad may cause serious ecological problems, comparable to the impact of the cane toad due to competition with native species, its potential to spread exotic parasites and pathogens and its toxicity. Like the cane toad, the black-spined toad secretes poison from a gland on its back to ward off predators.

Environmental impacts: Argentine ant is one of the world’s worst invasive species. It forms super-colonies and are aggressive competitors, displacing most other ant species. It can alter ecosystem processes such as pollination and seed dispersal of native plant species.

Environmental impacts: Poorly known due to limited research. Asian honey bees have a broad floral appetite and will compete for pollen and nectar with native birds, mammals and insects, and for nesting sites in tree crevices. There is a risk native pollinator systems will collapse ‘under the pressure of these super-consumers of floral resources that perform poorly as pollinators and exclude native pollinators through resource depletion’.

Species: Avian bornaviruses that cause proventricular dilatation disease . Two genotypes have been introduced into Australia (through the importation of parrots) and are present in avicultural collections. Other genotypes could also be present, either as introduced pathogens or naturally occurring viruses in native birds.

Environmental impacts: The impacts of bornoviruses on captive-raised parrots are sometimes ‘catastrophic’. According to Wildlife Health Australia, these viruses threaten captive breeding and reintroduction programs for threatened parrots, and their escape from captive birds into wild populations would pose ‘a significant risk to native parrot and passerine species’.

Environmental impacts: This bee could have serious impacts due to its high relative abundance, long seasonal activity, and an apparent preference for introduced plants and declared noxious weeds in New South Wales. Impacts could include competition with native fauna, transmission of parasites and pathogens, disruption of native plant pollination networks and exacerbation of weed problems.  NB: The species was previously thought to be Halictus (Seladonia) smaragdulus. but further taxonomic work has confirmed it to be Seladonia hotoni.

Environmental impacts: The red imported fire ant is one of the worst invasive species in the world. In Australia there are concerns for many native species that are declining already from other impacts, including threatened turtles, crocodiles, lizards, frogs, and ground-dwelling birds such as the malleefowl, black-breasted button-quail and plains wanderer, among many others.

Environmental impacts: The features that make cichlids popular pets are also those that contribute to their invasive potential: ‘they are hardy, adaptable and breed prolifically’. They eat almost anything smaller than themselves, including fish, invertebrates and frogs.

Environmental impacts: Mexican feather grass has been described by weed experts as ‘a potential disaster for the Australian environment’. It is a high-fibre, low-protein grass of no grazing value to livestock, which presumably also has no value for kangaroos and other native grazers.

Environmental impacts: Australia is in the early stages of invasion by myrtle rust, a fungus that causes disease in Australia’s dominant plant family, Myrtaceae. The impacts so far indicate it will have very serious ecological impacts.

Environmental impacts: The pigeon paramyxovirus causes an often fatal disease in many bird species worldwide, not just pigeons. Overseas it has infected raptors, pheasants, swans, cockatoos and budgerigars. So far in Australia the virus has infected racing, show and feral pigeons (rock pigeons and one spotted turtle dove).

Environmental impacts: Red-eared slider turtles are rated one of the world’s worst invasive species. They could cause declines in rare frogs and other aquatic animals they prey on and show all the hallmarks of being the reptile equivalent to the carp’.

Environmental impacts: The smooth newt is a generalist carnivore, eating invertebrates, crustaceans, and frog and fish eggs and larvae. It may compete with or prey on a wide range of native land and freshwater species. Potential impacts could arise from predation, competition, toxicity and disease spread. 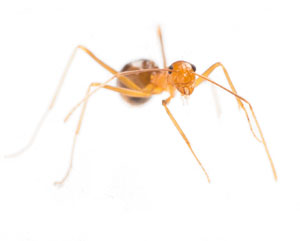 Environmental impacts: Yellow crazy ants can form large-scale super-colonies, extending over more than 100 hectares. On Christmas Island, they have killed tens of millions of ecologically important red crabs and robber crabs. Prior to a multi-million dollar baiting program, they had invaded more than a quarter of the island’s rainforest, reaching densities of more than 2000 foraging ants per square metre and transforming the ecosystem.

Environmental impacts: Green iguanas can grow up to 2 metres long. They are agile climbers and live in trees. A habit of diving into water (and staying submerged while swimming) makes them difficult to capture. Large areas in Australia, particularly across the north and down the east coast are considered climatically suitable for green iguanas.

Pathogens of wattles and eucalypts

Species: Several pathogens not in Australia that infect Acacia and Eucalyptus species in overseas plantations.

Environmental impacts: As exemplified by the impacts of myrtle rust plant species exposed to new pathogens can be devastated by disease. By exporting eucalypts and wattles for large-scale cultivation in plantations, Australia has created conditions for overseas pathogens to shift host species and adapt to infecting Australian natives.