Yellow crazy ants are on the list of 100 of the world’s worst invasive species and threaten Queensland’s Wet Tropics World Heritage Area, the oldest continuously surviving tropical rainforests on Earth and home to the greatest biodiversity found anywhere in Australia.

If not stopped in their tracks they could threaten Queensland with economic and ecological disaster, putting the state’s sugar cane industry at risk and threatening devastating impacts on housing development in Cairns.

Although the ants are tiny they can swarm in great numbers, killing much larger animals like lizards, frogs, small mammals, turtle hatchlings and bird chicks.

When their numbers hit super colony levels they can have a devastating impact on native wildlife and plants, upsetting entire ecosystems.

On Christmas Island the ants have killed millions of the famous red land crabs and robber crabs, both of which play an important role in the island’s forest ecology. Sap-sucking bugs and sooty moulds that severely damage plants and trees have proliferated, further degrading the island’s forests. Numbers of native insects and other small animals have been dramatically reduced.

Overseas, yellow crazy ants nesting near seabird colonies have killed and deformed large numbers of chicks by constantly spraying them with acid.

While ant numbers and their impacts fluctuate depending on environmental conditions, Queensland’s wet tropics make ideal habitat for yellow crazy ants and are especially vulnerable to invasion.

The program is on track to achieve eradication within a ten-year timeframe. But ongoing funding is vital for success.

FUNDING APPROVED: In July 2019, we learnt that the Queensland government had joined the federal government in providing the needed $18 million for the next three years, with each government providing 50% of the cost. This is the first stage of the needed ten-year's funding to eradicate yellow crazy ant from Wet Tropics rainforests near Cairns.

Yellow crazy ants are a highly aggressive tramp ant that made it into Australia through our ports. In a suitable climate such as that of the Queensland Wet Tropics they can form super colonies over vast areas and have huge environmental, social and economic impacts.

Yellow crazy ants do not bite, but spray formic acid to blind and kill their prey.

Once the ants reach super colony levels they can become a severe threat to people, especially children and the elderly, as well as pets. They can damage household electrical appliances and wiring.

One man in Australia has already suffered serious injury from yellow crazy ants. While sleeping at his home in Edmonton, Queensland, the ants swarmed all over Frank Teodo’s face, burning his eyes badly with their acid. And he’s not alone, people’s pets have been sprayed by the ants’ acid, injuring their eyes, mouth and paws. The ants can also kill small and young animals including chickens and native animals.

Yellow crazy ants are a huge threat to agriculture in Australia’s warmer regions. By farming sugar-secreting scale insects and encouraging sooty moulds they can dramatically reduce the productivity of crops such as fruit trees and sugar cane.

An independent review by Melbourne University found the invasive ants are still eradicable and their preliminary analysis shows that without the program the socio-economic costs alone would exceed $700 million over the next seven years.

They would destroy tourism values in Queensland’s Wet Tropics World Heritage rainforests region, where tourism is worth $2 billion a year.

“If there was no eradication program yellow crazy ants would have a devastating impact on housing development in Cairns,” he says. “People simply wouldn’t want to move their families into an area where there is the risk of yellow crazy ants.”

Sugar cane farmers Dino and Stella Zappala have seen first hand how the eradication program has reduced ant numbers on their farms and allowed the sugar industry to continue to operate with little inconvenience.

“If the ants return to former densities, they will quickly spread and damage sugar cane production and could make the industry unviable.”

Townsville and World Heritage at risk

Since 2018 our Queensland team Yvette, Bev and Janet have been quietly working away with locals in the small town of Nome south of Townsville to eradicate yellow crazy ants.

It’s vital work if we want to secure Queensland from the march of these invasive ants, which form giant super colonies that vacuum up small birds, lizards, frogs and even small mammals.

We were on the cusp of declaring Nome free of yellow crazy ants. Then a new infestation turned up right at the edge of our survey area.

We were all devastated. Our staff and volunteers have put in a huge effort to eradicate yellow crazy ants, an ant so devastating that it is on the IUCN list of 100 of the world’s worst invasive species.

And there are three other areas with yellow crazy ants in Townsville that are not being treated at all.

Our funding for Bev and Janet’s work has run out, but regardless, they are still working on the Townsville Yellow Crazy Ant Community Taskforce as volunteers.

We need to secure enough money to rid the Townsville area of yellow crazy ants and the only way we can do that is with your help.

There are now five populations of yellow crazy ants encircling Townsville – at Nome, Black River, Mount St John and Douglas. The fifth population is the one found recently by Bev and Janet at Alligator Creek.

Eradication of the Nome infestation is on track. The four other infestation sites need urgent treatment and pose serious environment threats if allowed to spread.

Yellow crazy ants are a serious threat to native wildlife in tropical and sub-tropical Australia. 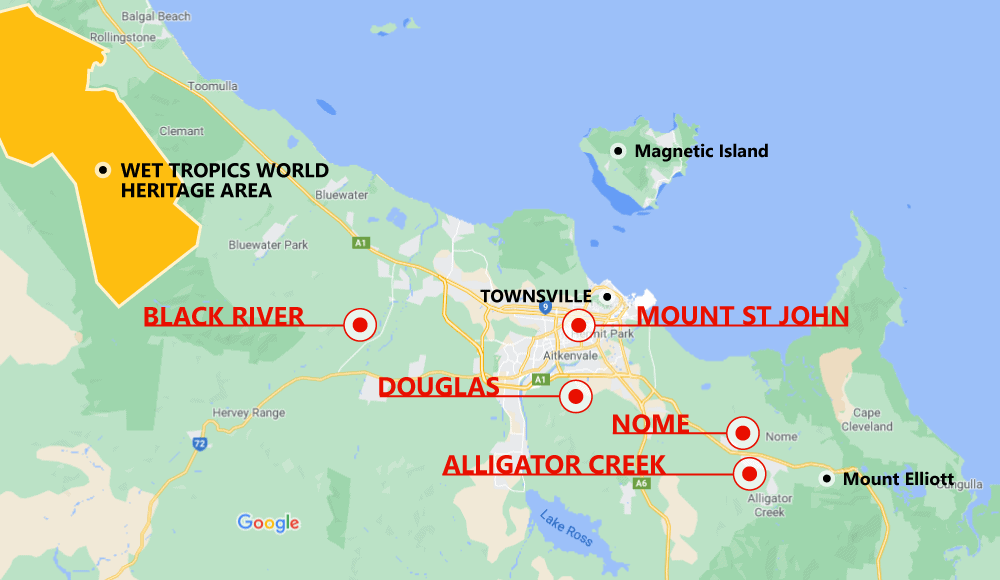