In 2020 our Froggatt Awards recognised some outstanding achievements in the fight to protect Australia’s native plants and animals from invasive species.

In Tasmania the persistence and dedication shown by a small team of volunteers in eradicating rats from Big Green Island earned them a Froggatt Award.

In Western Australia our awards paid tribute to Dr Dave Algar, the man who spearheaded efforts to reduce the impacts of feral cats in that state.

And in Victoria a Froggatt Award gong went to a project giving land managers the tools to eradicate new weed invasions before the weeds get a stranglehold in sensitive bushland, coastal and alpine environments.

Awarded to the project partners of the eradication of black rats from the 125-hectare Big Green Island in Bass Strait: Wildcare Tasmania, Tasmania Parks and Wildlife Service, Pennicott Foundation and Biosecurity Tasmania.

The eradication project involved the deployment of 2200 bait stations across the island during 2016. Volunteers from Tasmania and interstate and staff from Pennicott Wilderness Journeys walked the island daily to check rat-baiting stations.

Baiting eliminated more than 99% of the invasive rats and Parks and Wildlife Service staff located and dispatched the last few, assisted by a conservation detector dog used on Macquarie Island. Success was declared in March 2019 after two years without detecting black rats on the island.

The project was a community and government collaboration involving the Wildcare volunteers, Tasmania Parks and Wildlife Service, Biosecurity Tasmania, the Pennicott Foundation, the Aboriginal community and the island’s lessee.

The project’s success was a result of persistence and dedication by all involved and has resulted in increased protection for the island’s biodiversity values. 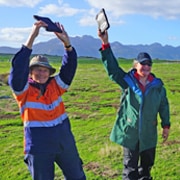 Awarded to the Weeds at the Early Stage of Invasion Project, a decision-making framework and support program developed by the Victorian Government to guide action in response to weeds at the early stages of invasion.

The project team is powered by Kate Blood and Bianca Gold of the Department of Environment, Land, Water and Planning.

The program was first developed in 2011. Tools developed included a 78-page manual, individual manuals for each stage of the decision-making process, field recording templates, checklists and a seasonal newsletter.

The program facilitates a preventative approach, applying the principles of the invasion curve that it is much more successful and cost-effective to eradicate weeds at the early stage of invasion rather than try to manage them when they become widespread.

By applying the Weeds at the Early Stage of Invasion framework, resources can be efficiently directed to respond to a new weed threat. While the program was developed for Victoria it could be easily adapted to all of Australia.

The Weeds at the Early Stage of Invasion team publishes a quarterly newsletter, holds regular training on weed identification and the use of the decision-making methodology and has an active presence on social media. A special bushfire recovery edition was published in response to the devastating 2019-20 black summer bushfires and the resulting weed risk. 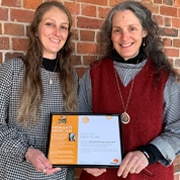 Awarded to Dr Dave Algar, principal scientist at the Department of Biodiversity, Conservation and Attractions, Western Australia, who has spearheaded efforts to reduce the impacts of feral cats in Western Australia.

Dr Algar led the team that developed ERADICAT, a bait now used in Western Australia for feral cat control, where most native mammals have a high tolerance to 1080. Prior to this there was no cat-specific bait available for use in Australia.

ERADICAT is made mainly of kangaroo meat that looks like a chipolata sausage and injected with the toxin sodium monofluoroacetate (1080). ERADICAT has been shown to provide effective and sustained control of cat populations at the landscape level, allowing the survival of small mammals hunted by cats.

Dave was also the driving force for the eradication of feral cats from the 62,000 hectare Dirk Hartog Island. The island, a national park in the Shark Bay World Heritage Area, had lost 10 of its 13 ground-dwelling mammal species due to predation by feral cats and the impacts of sheep and goats.

The last feral cat was removed from the island in October 2016 and 46,000 km of monitoring and 114,684 camera trap nights have confirmed success, which was independently confirmed by Island Conservation in 2018. This was the largest eradication of feral cats from an island in the world and means that all of Western Australia’s islands are free of feral cats.

The success of this eradication along with the removal of goats and sheep has inspired Return to 1616, an ecological restoration program that would see the reintroduction to Dirk Hartog Island of lost mammal species and the recovery of the ecosystems to a time before European occupation.

Dave represents the Western Australian government on the national feral cat taskforce and is now working to eradicate feral cats from Christmas Island. 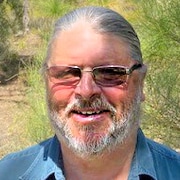