In the release Game Council NSW accuses ISC of being an “ill-informed nuisance organisation” that is “seeking to impose extremist environmental messages onto governments” because the council has called on NSW to follow the lead of Queensland and South Australia (and Western Australia) by declaring deer a pest.

“Their claim that declaration as a feral species would increase the environmental harm deer cause is difficult to understand, and the game council provides no information to substantiate this,” Mr Low said.

“Recreational hunters are one of the main reasons eastern Australia has a deer problem. Many new feral populations have been established by hunters to provide hunting opportunities – more than half of 218 feral deer herds identified in 2000. Since then, dozens more feral herds have been found – another 30 in a NSW survey between 2002-2004.

“In NSW state forests over the past two years, recreational hunters licensed under the Game Council have killed on average just 350 deer a year.

“This is only a few more than the 300 rusa deer that need to be killed annually in one small national park (Royal National Park) to achieve slight population reductions (0.4 per cent), according to estimates by the NSW Department of Environment and Conservation.

“The Invasive Species Council has produced a detailed report, A Deer Mistake, that explains why we believe deer should be declared a pest.

“Our approach is based upon a considered review of the evidence to hand,” Mr Low said. 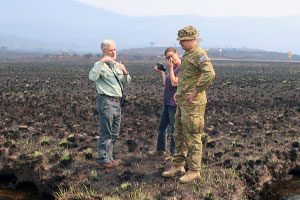