This submission responds to a request for views on the draft National Environmental Biosecurity Response Agreement (NEBRA) released by Australian national, state and territory governments in May 2019. This was part of the five-year NEBRA review for state, territory and federal governments that commenced in October 2016.

This submission seeks improved decision-making under NEBRA to optimise the public interest and ensure that the agreement adequately protects the Australian environment and its people from newly-detected invasive species.

The submission argues there should be an automatic triggering of NEBRA for priority organisms, majority instead of consensus decision-making, support for the enhanced custodian role, more meaningful involvement of environmental stakeholders and environment departments, incorporation of NEBRA measures into all other response agreements and greater transparency.

The submission was prepared by the Invasive Species Council and endorsed by the following organisations: 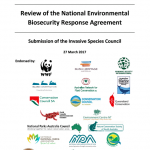 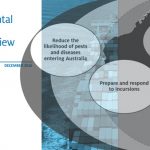