You are here: Home > Projects > Weeds

Bitou bush is a threat to 158 species. One of hundreds of weeds imperilling NSW’s wildlife. Photo: Tim Parkinson (CC BY 2.0)

Weeds have been a problem in Australia since prickly pear first engulfed large tracts of land in the nineteenth century, forcing many farmers from their properties.

Since then the list of invasive alien plants in Australia has grown to more than 2700, a figure that climbs by about 20 new species every year.

Weeds can be as destructive as land clearing – displacing and threatening native species and transforming ecosystems. Invasive pasture grasses that kill trees by fuelling fires can be especially destructive.

A NSW study found that almost half of that state’s threatened species and the majority of endangered ecological communities are threatened by weed invasion.

And with more cyclones, droughts, fires and floods predicted under climate change, and native species under stress, weed invasions are likely to get much worse.

Yet despite their threat, most invasive plants in Australia are not regulated and continue to be planted and introduced to new areas.

We advocate a much stronger focus on prevention as many of Australia’s weeds are in a very early stage of invasion or not yet spreading.

To combat Australia’s worsening weed problem, the most important reform for weed prevention would be new laws to create a list of safe plant species that can be sold and moved in each state and territory.
Read more >>

The majority of Australia’s weeds have been introduced deliberately, and most of them have escaped from gardens (garden escapees), doing terrible damage to our natural environment.
Read more >>

Our report ‘Sowing the Seeds of Destruction’ details the environmental risks posed by weedy pasture plants being used for salinity control in southern Australia.
Read more >>

Stopping the weed crisis in NSW

Weeds are recognised as the serious and rapidly increasing threat to endangered native plants and animals in NSW. That’s why in 2010 the Invasive Species Council prepared Stopping NSW’s Creeping Peril, a report calling for concerted action to address the state’s growing weed problem.
Read more >>

Gamba grass was declared a weed by both the Queensland and Northern Territory governments thanks to our efforts.
Read more >> 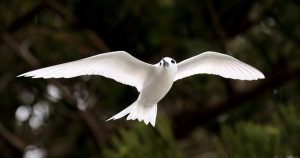