The NSW Berejiklian government’s lack of action to protect a critically endangered native fish from extinction is dangerous, irresponsible and should be condemned.

The last remaining population of critically endangered stocky galaxias is confined to a three-kilometre section of a small stream in Kosciuszko National Park.

Since NSW Deputy Premier John Barilaro’s controversial horse protection act an increasing number of feral horses in the area have all but destroyed the fish’s remaining habitat. The Reclaim Kosci campaign led by the Invasive Species Council is demanding urgent action.

“The destruction caused by these feral horses leaves the fish with less food and without viable breeding sites. Without immediate action, the stocky galaxias is in danger of extinction.

“In an extraordinary move, the NSW parks and wildlife service is now considering fencing the horses out of the last of the remaining habitat of these unique native fish, but this is just an expensive band-aid solution to an increasingly urgent issue.

“I’ve spent my whole life in the Snowy Mountains. The sweeping devastation that has been caused by feral horses is distressing. Yet this government has doubled down on endorsing horse destruction of our native wildlife by protecting them. It’s disgraceful.

“Without action to reduce feral horse numbers and save the stocky galaxias we can only conclude that this is a state government that endorses extinction.

“This critically endangered fish is unique to Australia and unique to Kosciuszko. We are calling on the incoming NSW government to take urgent action to repeal the destructive horse protection act and reduce feral horse numbers, or risk the stocky galaxias and more of our native wildlife facing extinction,” Mr Swain said.

Threatened freshwater fish expert, Associate Professor Dr Mark Lintermans from the Institute of Applied Ecology at the University of Canberra, is also calling for urgent action.

“Without direct action, these feral horses will greatly increase the risk of extinction of the critically endangered stocky galaxias,” Dr Lintermans said.

“Increasing feral horse numbers means increasing erosion of stream banks as they cross or stop to drink. The sediment the horses churn up is smothering stocky galaxias feeding habitats and reducing available food.

“The stocky galaxias attaches its eggs to the underside of rocks, and these eggs take 30 to 40 days to hatch in the cold upland environment. When feral horses destroy our riverbanks and churn up the water, the sediment smothers spawning sites and kills their eggs.

“The state government must take urgent action to reduce the impacts from feral horses. This is essential to ensure the survival of the stocky galaxias in its last stronghold.” 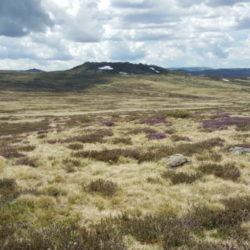 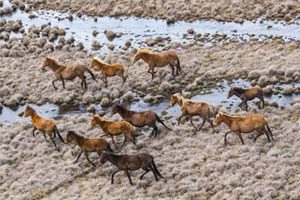