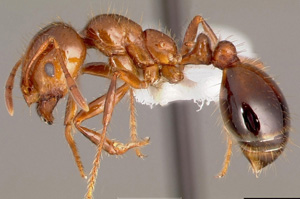 Discovery of red imported fire ants in Sydney this week needs to be the wake-up call that prompts state and federal governments to act more aggressively to keep Australia fire ant free.

“With governments bickering over funding and incursions increasing, Australia is at a crossroads,” said Invasive Species Council CEO, Andrew Cox.

“Red imported fire ants are the foot and mouth disease equivalent to Australia’s environment and our way of life.”

“If not eradicated, fire ants will devastate wildlife, stop our children from being able to play in grassy areas and cost the economy billions of dollars a year. The costs have been modelled at $43 billion over 30 years in Southeast Queensland alone.[1]”

“Yet the eradication program in Southeast Queensland lacks long-term funds, and biosecurity and surveillance systems to prevent and detect new incursions are regularly failing. There have been three new incursions in the past three years, with the most recent Queensland incursion not detected for probably three years.”

“While we wait for details of the Sydney incursion, such as how long it remained undetected and whether it originated from overseas, its presence alone must trigger government commitment to get on top of existing incursions and prevent new outbreaks.”

“The economic case to mount an eradication is overwhelming. In the south-west of the USA fire ants cost $7 billion each year for control, damage repair and medical treatment. They have caused more than 80 deaths. The cost estimate for southeast Queensland if eradication fails is about $1.5 billion a year.”

“To June this year federal, state and territory governments have directly spent $292 million since 2001 attempting to eradicate the ants from Queensland. While this sounds like a lot, it is highly cost effective with a benefit cost ratio of 390:1 [1].”

“In fact the lesson from the work so far is if more money had been spent in the early stages, this infestation may now be close to eradication. Ahead lies about ten-years of intensive eradication work. Success is not guaranteed, particularly if new incursions keep arriving.”

“There is too much at stake to contemplate failure. Governments must move beyond short-term economic bickering to escalate our response to fire ants.”

“Long-term funding for the southeast Queensland eradication must be committed and prevention and detection systems for exotic ants improved,” said Mr Cox.

[On 6 Dec 2014 authorities confirmed that the Port Botany infestation was unrelated to the other four infestations already in Queensland and originated from Argentina. The infestation is thought to have been at Port Botany for about six months based on the extent of the infestation]

Photo: Fire ants are tiny – between 2mm and 6mm long – and reddish-brown in colour with a dark abdomen. Photo: April Noble, Antweb.org, Bugwood.org

Report suspected sightings to the Exotic Plant Pest Hotline on 1800 084 881 or email your sighting details and a photo to biosecurity@dpi.nsw.gov.au.

The Invasive Species Council posed a series of critical questions to the current Senate inquiry into preventing new invasive species impacting the environment.