You are here: Home > Projects > Plant disease threats from overseas

New plant diseases that could one day blight Australian ecosystems are incubating in overseas plantations and crops of Australian plants.

One of the few potential advantages of the incursion of myrtle/eucalyptus rust into Australia is that it may focus biosecurity attention on these other disease threats.

Biosecurity holes can be blamed for the recent arrival in Australia of the South American rust Puccinia psidii (or Uredo rangelii depending on taxonomic resolution). But the likely disaster now unfolding for our dominant plant family due to this rust was probably initiated when Australia started exporting its eucalypts around the world, including to South America, there to be exposed to pathogens native to South American Myrtaceae. The rust was recorded jumping host to eucalypts in Brazil in 1912 and first caused a serious disease outbreak in a Eucalyptus plantation in 1973.

By exporting eucalypts and acacias for large-scale cultivation in plantations, Australia has set up the conditions for new pathogens to shift and adapt to Australian natives. An estimated 18 million hectares in 80 countries are planted with eucalypts. Australian acacias are grown in Africa and South East Asia. The same risk may apply to other Australian plants grown as crops – native floral species such as Geraldton wax cultivated for the cut flower trade, for example – or that become dominant weeds, as Australian acacias have done in Africa or Melaleuca quinquenervia in Florida.

Monocultures are favourable habitats for new pathogens to invade and can support far greater pathogen densities than are typically found in natural situations. Global trade and travel then provide the means for pathogens adapted to Australian species overseas to eventually make it into Australia, where many more hosts await them in natural ecosystems or in cultivation. Plants newly exposed to pathogens can be devastated by disease.

Eucalyptus rust is just the first of several pathogens that could follow this path. We provide several examples of others here.

There is little awareness of these threats and no serious biosecurity preparations. South African fungal researcher Michael Wingfield (2003) has highlighted the risks:

… native pathogens, previously thought to be relatively host specific and non-threatening, are adapting to infect exotic plantation trees. Other than the damage that these pathogens are causing to exotics, they now pose a serious threat to the same or related tree species in their areas of origin. This tremendous threat is only just being recognised and it is little understood.

Wingfield notes that plantation forestry in the tropics and southern hemisphere has occurred for more than a century, but that this is a short time for pest and pathogen development. New diseases are rapidly emerging in plantations – some are due to pathogens arriving from the native range of the plant; others, including some of the most serious, are due to native pathogens jumping host to the non-native plantation species.

Chrysoporthe spp: The fungi Chrysoporthe cubensis, which naturally infects plants from the family Melastomataceae in South and Central America and South East Asia, and Chrysoporthe austroafricana, which infects Syzygium species in Africa, have both become new pathogens of eucalypts in plantations, causing serious stem canker diseases. According to Gryzenhout and Wingfield (2008), these and other members of the Cryphonectriaceae family affecting eucalypts ‘probably occur on the vastly unexplored native vegetation surrounding many of these Eucalyptus plantations’.

A related fungus Cryphonectria parasitica causes chestnut blight, a disease that has virtually eliminated American chestnuts (Castanea dentate) from the US.

Ceratocystis fimbriata: This fungus causes disease and death of eucalypts in the Republic of Congo, Uganda and Brazil but its origins are as yet unclear. C. fimbriata is considered a complex, probably consisting of numerous species.
Erwinia psidii: Teresa Coutinho and colleagues have reported a new disease of eucalypts in South America caused by this bacterium, one of the most important pathogens affecting guava in central Brazil. In eucalypts, it causes shoot and branch die-back, and secondary infections cause cankers on branches and growing shoots. So far, it has damaged young trees up to two years of age.

Puccinia psidii: There are likely to be dozens of different strains of Eucalyptus rust that may infect Australian Myrtaceae grown in the native or exotic range of the pathogen and which may eventually supplement the strain invading Australia. Greater genetic diversity could exacerbate disease severity and increase the number of hosts.

Other potential pathogens come from the fungus family Botryosphaeriaceae. Tests of various members of this family native to Myrtaceae in Uruguay (from the Neofusicoccum ribis – N. parvum group and Lasiodiplodia pseudotheobromae) found they were highly pathogenic on Eucalyptus, killing stem tissue and causing large cankers. They could become plantation diseases in the future.

At least three Australian wattles (A. mearnsii, A. crassicarpa and A. mangium) are extensively grown in plantations in Africa and South East Asia, and others are serious weeds in southern Africa.

Ceratocystis albifundus: This is an African fungus that infects trees in more than seven native genera (incuding Protea) but rarely causes disease. It has shifted host to A. mearnsii and causes rapid wilting, dieback and death in plantations. It also infects A. decurrens. At least four other recently discovered Ceratocystis species may have the potential to infect Australian acacias in Africa.

Many other Australians are also cultivated overseas: for forestry (casuarinas, in addition to eucalypts and wattles); the cut flower trade (Geraldton wax and kangaroo paw for example); and pharmaceuticals (Duboisia myoporoides for example).

Ronald Heath and colleagues (2007) reported the discovery of Holocryphia eucalypti, a fungus probably native to Australia, on diseased stems of Tibouchina urvilleana suffering dieback in Australia. T. urvilleana is a South American plant in the family Melastomataceae (related to Myrtaceae) traded as an ornamental all over the world. H. eucalypti generally causes mild canker in eucalypts, but can kill stressed trees.

The strain infecting T. urvilleana is more pathogenic on T. urvilleana than those from eucalypts, suggesting adaptation to the new host. If it is accidentally transported to South America, it could be ‘a major threat to the native Tibouchina population and possibly other native Melastomataceae.’

Taking these threats seriously means focusing on disease risks to Australian plants both home and abroad. Australia should be working with forest managers overseas to identify risks and adopt practices to minimise the transfer of pathogens from native forests to plantations and crops of Australian species. We should be funding research to assess disease risks and identify pathways for their potential entry into Australia.

The risk of pathogen transfer either from Australia or into Australia should be taken into account when plants are developed for cropping overseas, particularly when there are large plant families in common.

The serious risks to Australian plants and animals associated with exotic diseases warrants a strong biosecurity focus. We need a research and policy body for the environment along the lines of Plant Health Australia and Animal Health Australia, which focus on risks to animal and plant industries. 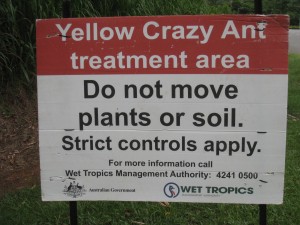